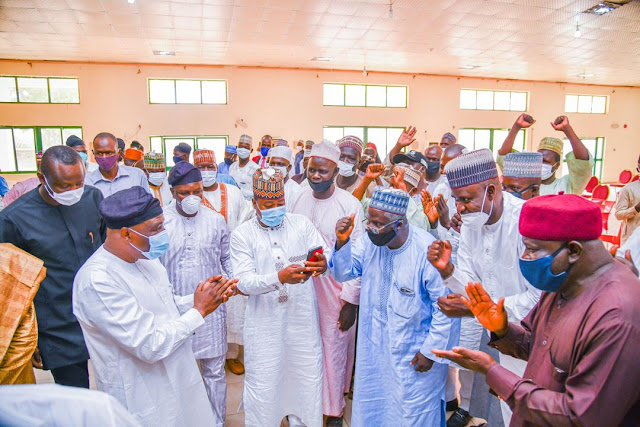 Governor Ahmadu Umaru Fintiri of Adamawa State has assured renovation of old Teachers College Song now Government Secondary School Song and the Cottage Hospitals in Dumne and Song. The Governor also assured them his Government's commitment in providing dividends of democracy to the masses in rural communities will be his priority.


Governor Fintiri made these assurances when the people of Song Local Government Area paid him a thank-you visit Sunday over the appointment of their sons and daughters in his administration.


Receiving Song stakeholders at the Banquet Hall in Government House Yola, the Governor told Song people that during the electioneering campaign, he promised  welfare for Civil Servants and citizens, security and infrastructural development which he said are enshrine in his administration's Eleven-Point agenda. The Governor maintained that his administration delivered them to the people.


He said that his administration has finished plans to upgrade Song and Dumne Cottage Hospitals while the old TC Song will have a new facelift; stressing that as soon as the bidding for contract is complete, contractors would be mobilised to the site.


Satisfy with his administration of development, Governor Fintiri commended the Chairman of Song Local Government Area,  Hon.  Gidado Abdulsalami for providing dividends of democracy to the people he is leading, saying the Chairman is doing what he was elected for.


Governor Ahmadu Umaru Fintiri further assure the Song people that his administration will look into their request and place it under next phase of rural road construction.


Earlier, the leader of the delegation, the Honourable Commissioner Ministry of Rural Infrastructure and Community Development, Abdullahi Prambe said they were in Government House Yola to thanked Governor Fintiri for appointing over thirty of their sons and daughters into his administration.


The Hon. Commissioner applauded Governor Fintiri for bringing development in Song,  recalling that prior to the coming of the Fresh Air Governor, no single project with the name of Song LGA in the Ministry of Rural infrastructure. He explained that  Governor Fintiri has approved construction of roads in Song which made them to be among LGAs to benefit from rural roads project of Governor Fintiri led administration.


Contributing, the chairman Song LGA Hon. Gidado Abdulsalami and the District Head of Song, Alhaji Ahmed Saidu   thanked Governor Fintiri for bringing dividends of democracy to the door step of the Community of Song and for appointing for the first time numerous sons and daughters in to Adamawa political offices.


On his part, the Special Adviser to Governor Fintiri on Christian Religious Affairs Rev. Kallamu also thanked Governor Fintiri for his security architecture which help to combat especially kidnappers who were the nightmare of Song community. He however call on the Governor to redouble effort so as to completely halt the activities of the kidnappers who have recently resuface, tormenting their community.