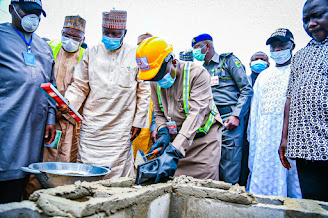 Performing the flag off and foundation laying ceremony on Tuesday in Lamurde, Governor Fintiri said the new Cottage Hospital which will be constructed is the beginning of the provision of numerous dividends of democracy for the people under his administration.

Governor Fintiri disclosed that in his administration's effort to revive the health sector, his Government began by building a befitting Centre for Disease Control to fight all forms of known and unknown infections, which is also the first in the North East Region while ensuring that numerous Isolation Centers were renovated, equipped and beefed up with unending medical supplies.

He disclosed that his government has taken stock of Secondary Healthcare facility in Lamurde and in fulfilment of his administration Health Sector Reform Agenda, his government decided to build a befitting Cottage Hospital for the entire community of Lamurde and beyong.

"We are ever more determined to change the unacceptable Health indices we met on ground, which is why my Government has earmarked a huge amount to rehabilitate all the General Hospitals and construct new ones where they are lacking", Governor Fintiri said.

He charge the contractors to execute the project according to specification and utmost regard to timelines while urging traditional and Community leaders of Lamurde to work hard to ensure that their people cooperate with the contractors so as to deliver the project.

Earlier, the commissioner for Health Professor Abdullahi Isa applauded Governor Fintiri for proving a secondary healthcare facility to Lamurde after 24 years of its creation.

On his part, the representative of Relia Build Construction Company, Engr. Godwin Bishong assured that his company will meet the specification and the timeframe.

While in their separate remarks the Chairman Lamurde Local Government Council, Mr. Burto Williams and Chairman Lamurde Elders Forum Albert Dabara who speak on behalf of the community, thanked Governor Fintiri for remembering them in his ongoing laudable projects across the State.

They assured Governor Ahmadu Umaru Fintiri their  unflinching support and loyalty to this administration.