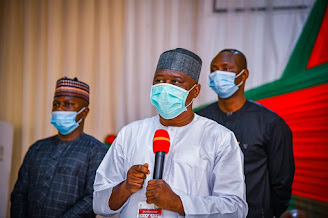 22/8/2020
Governor of Adamawa State, Rt. Hon. Ahmadu Umaru Fintiri has reiterated the commitment of his administration to providing security to Mubi zone which was the most affected by the activities of the dreaded Boko Haram.
The Mubi Zone comprises of five Local Government Areas of Madagali, Michika, Mubi South, Mubi North and Maiha. 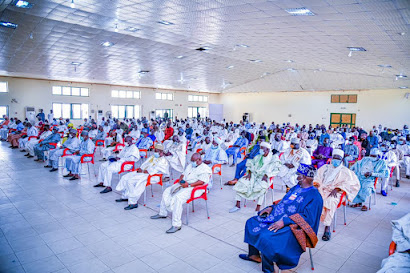 Speaking while receiving the sons and daughters of the zone in a thank-you visit Saturday at the Banquet Hall, Government House Yola, Governor Fintiri said his administration’s new security architecture has yielded positive result which has drastically reduced the rate of crime in the State to a single digit.
He enjoined the people of Mubi zone to give maximum cooperation to security deployed to their areas so as to get rid of criminals and criminality perpetrated by some pocket of recalcitrant elements while reminding them security is a collective responsibility.
Congratulating political appointees from the zone,  Governor Fintiri call on the Chairmen of Local Government Areas in Mubi zone to complement state Government’s effort by providing security to  the  lives and properties  of their citizens, simultaneously providing the dividends of democracy to the door step of the masses at the grassroot.
He assured that his Government will continue with good policies and work that is ongoing across the state. Adding that he will not disappoint the confidence the people of the state have on him.
Governor Fintiri further assured that his administration will revive boaster station of ATV and other state own media to cover Mubi Zone which was neglected by pass government as requested by the people of the zone.
He thanked people of Mubi zone for supporting his Government especially members of the State House of Assembly despite their political differences. Adding their support is helping in shaping Adamawa to the expected level.
Speaking, the leader of the delegation, the Emir of Mubi, HRH Alh. Abubakar Isa  Ahmadu applauded Governor Ahmadu Umaru Fintiri for his gigantic projects across the state and the security of lives and property of the peace loving citizens of the State which he said is the best thing that is happening to the state.
He call on the people of the state to rally round Governor Fintiri with support so that he will continue with the good work which he is doing for the state.
In his remark, ALGON Chairman, Hon. Jingi Rufai said that Governor Fintiri has fulfil his campaign promises by embarking on projects which are enshrined in his Eleven-Point agenda. He assured their unflinching support and loyalty to Governor Fintiri led administration while expressing optimism that at the end of the Governor’s tenure he will live a legacy that will touch the lives of the masses.
Hon. Rufai revealed that one hundred fourty four 144 Sons and Daughters of Mubi zone were appointed by Governor Fintiri in his administration while thanking him for the opportunity given to them to serve people of the state.
.
13:06
Adamawa Daily Reports
Email ThisBlogThis!Share to TwitterShare to Facebook