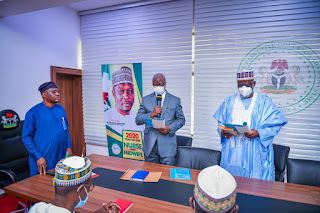 By Barnabas Augustine
9/9/2020
Governor Ahmadu Umaru Fintiri has sworn in Alh. Usman Aliyu Marafa as his Special Adviser on Chieftaincy and Pilgrim Affairs.
Performing the ceremony on Wednesday in his office in Government House Yola, Governor Fintiri said Alh. Marafa is a known person to him who served as his Director General during the 2019 general elections.
He said he knows Alh. Marafa with his pedigree and someone who can perform the responsibility bestowed on him.
Governor Fintiri described Alh. Marafa as person who loves Adamawa and its unity and peace while expressing optimism that the appointee will continue with the good attitude he was known with for the development of the State which is yearning for peace and development.
He urge the appointee to maximally deploy his vast experience and advice for the progress of the State.
Responding, the appointed Special Adviser on Chieftaincy and Pilgrim Affairs, Alh. Usman Aliyu Marafa thanked Governor Ahmadu Umaru Fintiri for appointing him to serve as Special Adviser in his led administration.
He assured that he will work with other advisers to ensure the development of Adamawa while promising his loyalty to Governor Fintiri regime.
Highlight of the event was oath of office and allegiance administered by the State Commissioner of Justice and Attorney General, Barr. Afraimu Jingi to Alh. Usman Aliyu Marafa.
The event was attended by the Secretary to the State Government Bashir Ahmed, Chief of Staff to Governor Fintiri Prof. Maxwell Gidado among top Government officials.
11:52
Adamawa Daily Reports
Email ThisBlogThis!Share to TwitterShare to Facebook