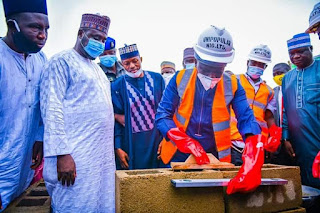 Performing the ceremony in Gombi on Thursday, Governor Fintiri said that construction of secondary health facility in Gombi metropolitan was long over due.

Adding that people of the community have to travel about 37 kilometre to Garkida with its attendance inconveniences couple with bad road or to alternatively travel to nearby local governments of Song or Hong.

The Governor said his administration has come to change the negative narrative of health delivery service in the state as the COVID-19 pandemic has further expose the weaknesses of Adamawa health sector.

He explained that his Government is doing enough to ensure that primary health sector has been left abandoned but fortified enough to address emergence challenges.

He said that other measures which has been taken to include building of the best infection centre in the state, purchase and distributions of medical equipment and consumable to health facilities across the state, approval of full take off of health insurance scheme in the state, renovation and upgrading of hospitals in the state and recruitment of qualified health workers.

Earlier, the Commissioner of Health and Human Service, Prof. Abdullahi Isa said that a sixty bed capacity cottage hospital with all the clinical departments  inclusive will be built in Gombi town.

He revealed that building of the cottage hospital will cost one hundred and eighty million, nine hundred and nine thousand, six hundred and fourty three naira (N180,909,643).

The commissioner appeal to Gombi community to give maximum cooperation to the contractor to enable him complete the construction work accordingly.

In his vote of thanks, the Chairman Gombi Local Government area, Engr. Dimas Shekel thanked Governor Ahmadu Umaru Fintiri for providing health facility to the people of the Local Government.

He also thanked Governor Fintiri for facilitating construction of airforce base which will soon be realised in Gombi.

In their separate goodwill messages, Member representing Gombi in Adamawa State House of Assembly Hon. Japhet Kefas, Special Adviser to Governor Fintiri on political affairs Hon. Abdulrahaman Bobboi, Hon. Clapton Difirwiti and Hon. Rufai Umar lauded Governor Fintiri for his laudable projects across the state and for construction of first secondary health facility in Gombi town since the creation of Gombi LGA in 1976.