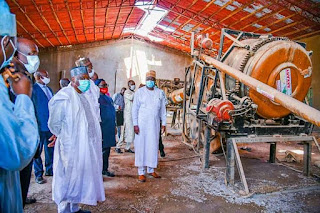 By Barnabas Augustine
7/8/2020
Governor Ahmadu Umaru Fintiri has taken steps to revive Government abandoned fertilizer blending plant, to start producing fertilizer for the state.
The blending plant which is located at Damare in Girei Local Government Area was not put in to use for about twenty years.
Speaking to newsmen shortly after inspecting the plant on Monday, Governor Ahmadu Umaru Fintiri assured that soon the plant will wear a new look with state-of-the-art equipment and commence operation so that farmers in the State will get the product here in Adamawa.
According to the Governor, his Government has prioritise  agricultural sector in the State as his administration has put in place motion machinery to actualize the mandate to enable farmers in Adamawa to access the fertilizer product closer and cheaper.
He noted that the facilities he inspected at the plant are outdated and in bad condition, while assuring that his administration will replace them with up to date machines and equipment so that the plant will produce qualitative product.
He added that when the plant is given a new facelift, it will help the state towards improving its internally generated revenue and provides teeming youths with employment opportunities.
Governor Fintiri assured that his administration will not relent until agricultural sector is improved which will in turn provide food security in Adamawa.
The Governor was conducted round the blending plant by the Director Engineering Services in the State Ministry of Agriculture, Mr Ishaya Atiwurcha, in company of the Secretary to the State Government Malam Bashir Ahmad among other Senior government officials.