NEWS UPDATE:ADAMAWA STATE GOVERNMENT TO SOON HAVE IT'S OWN FERTILIZER BLENDING PLANT. 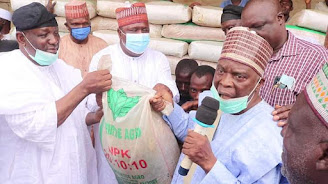 Adamawa State Government is working tirelessly to fix the Fertilizer blending Plant  at Damare to ensure availability within the shortest possible time.

This came to fore at the flag-off ceremony for  sales of Fertilizer for the 2020 Farming Season held at the Adamawa Agricultural Development Programme Headquarters, Yola Town. 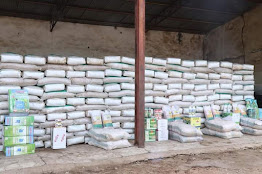 adu Umaru Fintiri who was represented by his Deputy, Chief Crowther Seth also lamented that, since the assumption of office, Governor AUF has made every effort to see that farmers in the State gets all the assistance they need in other to meet up with the food security of  His Excellency President Mohammadu Buhari.

While giving hope to farmers, Chief Crowther Seth said that Agriculture is the topmost priority of the current administration.

He caution the Honourable Commissioner for Agriculture, the Adamawa Agricultural Development Programme (ADADP) and all parties that will be involved in the sales and distribution process to avoid all temptation.

Earlier, the Commissioner,  Ministry of Agriculture, Dr. Fishi Khobe lauded Governor Fintiri for the giant stride in securing a waiver to procure and distribute Fertilizers to farmers despite the ban in 2018 by the Federal Government in three North Eastern State.

He assured Governor AUF that all mechanism has been put in place to tackle diversion and shady deals in the distribution process.

In his remark, the representative of farmers at the event lauded Governor AUF  for keeping his words on supporting farmers with subsidize fertilizer and other farm inputs.