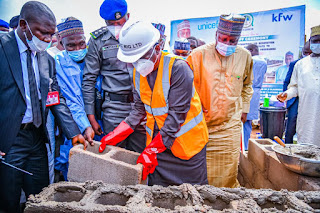 By Barnabas Augustine
17/9/2020
Governor Ahmadu Umaru Fintiri has laid foundation for the construction/renovation of eighty schools in partnership with the United Nations Children Education Fund (UNICEF), to support resilience education programming for children and youth in Adamawa State.
Simultaneously,  similar project is carried out in Guyuk Local Government  Area.
Performing the ceremony at Fufore Central Primary School, Thursday, Governor Fintiri said because his administration value education, on coming on board, he declared state of emergency on education.
He thanked UNICEF for its effort in ensuring that children in Adamawa are supported to get basic education in the challenging time of COVID-19 pandemic.
“I am delighted to hear the progress report of the Chairman of the Board and I want to use this opportunity to thank the UNICEF and development partners on Basic Education in Adamawa State including the Universal Basic Education Board for sponsoring some of these laudable projects”, Governor Fintiri said.
Governor Fintiri assured judicious use of the resources.
“As the Governor of this State, let me assure you that, we shall make sure that these resources will be judiciously channelled for the purpose intended.
“For us in Adamawa State, we have a duty to compliment the efforts of the UNICEF and other donor organizations by ensuring that every Kobo counts”.
Governor Fintiri call on parents and community leaders to ensure that their children are enrolled in schools when schools resume. Adding that “It will be of no use to build and furnish Classrooms only to leave them without pupils”.
Concern with the closure of schools due to coronavirus pandemic, Governor Fintiri said “though the break forced on us by COVID-19 has disrupted educational activities around the World, things will soon pick up because we are working out modalities to ensure that our children do not stay too long out of school”.
Speaking on behalf of UNICEF, the Chief, UNICEF Bauchi Field Office, Mr. Bhanu Pathak thanked their partner KFW and German Government for funding the project. He said construction of additional classrooms will be considered in Mubi North, Mubi South and Hong LGAs.
He noted that good education is key to eradicating poverty while assuring the commitment of UNICEF in partnering with Adamawa State Government in education sector, Mr. Pathak highlighted some of the projects funded by their partners and executed by UNICEF in Collaboration with Ministry of Education and Human Services in Adamawa to include teaching and learning programmes in radio and television reaching about fourty thousand pupil and students during COVID-19, enrolled dozens of out of school children back to school in Fufore, Girei , Guyuk, Mubi North, Yola South, Yola North LGAs among others.
He assured UNICEF’s continued support to Adamawa State Government to develop its education sector.
Contributing, the Executive Chairman Adamawa State Universal Basic Education Board (ADSUBEB) Dr. Salihi Ibrahim Ateequ said the project will be executed in Furore and Guyuk Local Government Areas by UNICEF and KFW a German cooperation agency.
According to ADSUBEB Executive Chairman, in Furore LGA the construction work will include construction of 31 blocks of 2 classrooms each making the total of 62 classrooms, construction of 1 parameter fence (256 meters long), rehabilitation of 2 blocks of 3 classrooms each making the total of 6 classrooms and rehabilitation of 6 blocks of 2 classrooms each totalling 12 classrooms.
He said the total number of construction work to be executed by UNICEF in Furore LGA is 39 blocks of 80 classrooms and one perimeter fencing.
While in Guyuk LGA Dr. Ateequ said a similar intervention is carried out by UNICEF with the Construction of 3 blocks of 2 classrooms each totalling 72 classrooms, construction of 2 blocks of 3 latrines for male and female and rehabilitation of 2 blocks of 2 classrooms each totalling 4 classrooms. He stated that the total number of construction work to be carried out  in Guyuk is 4 blocks of 85 classrooms and toilets.
While in Adamawa State, the total number of 79 blocks 165 classes and one perimeter fence of 256 metre and 2 blocks of 3 latrines will be constructed. He added that by the time these classrooms are constructed in Guyuk and Fufore, it will reduce the deficit in classrooms in the state while stating that it is the series of construction work to be carried out across the state.
In their separate remarks, the chairman Fufore LGA Honourable Musa Jauro Umaru and the Chairman Guyuk LGA Barr. Kassa Shalom thanked Governor Ahmadu Umaru Fintry and UNICEF for embarking on a laudable project that will revitalise education sector in the state.
Also in his goodwill message, the Chief Special Adviser to Governor Fintiri, Baba Joel Hammanjoda Madaki lauded the giant stride of the Governor in transforming the state to the expected level.
14:02
Adamawa Daily Reports
Email ThisBlogThis!Share to TwitterShare to Facebook