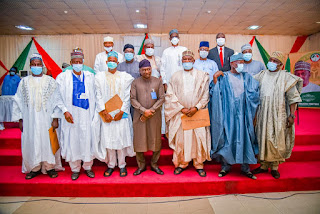 By Barnabas  Augustine
16/9/2020
Adamawa State Governor, Rt. Hon. Ahmadu Umaru Fintiri has sworn-in Chairman and Board members of Civil Service Commission.
Performing the ceremony Wednesday at the Banquet Hall Government House Yola, Governor Fintiri said his administration has carefully taken pen taking decision in selecting the Chairman and Board Members of the Civil Service Commission so as to fit into the reform carrying out in the Civil Service and to match the eleven point agenda of his administration.
Governor Fintiri enjoined the board members to settle down quickly, take the confidence on his Government and work within the ambit of the law while congratulating them on their well-deserved appointment. He further charged them to perform their responsibilities according to the oath of office and allegiance they have taken.
Responding, the Chairman Adamawa State Civil Service Commission, Dr Ahmed Ibrahim Gurin thanked Governor Fintiri for finding them worthy to serve in his led administration.
He described Governor Fintiri as an unbiased leader, leader for all and  a man who means what he said. He said the appointment came to them as a surprise.
The Chairman pledge their loyalty and unflinching support to Governor Ahmadu Umaru Fintiri led administration while assuring not to disappoint the confidence the Governor have on them by executing their responsibility accordingly.
Those sworn-in are Dr. Ahmed Ibrahim Gurin as Chairman while Bakari Betso, Umaru Garba Tola, Fredrick Bilala and Elkana Lawanare to serve as the Board Members.
Oath of Office and allegiance was administered by the State Attorney General and Commissioner of Justice, Barr. Afraimu Jingi.
12:19
Adamawa Daily Reports
Email ThisBlogThis!Share to TwitterShare to Facebook