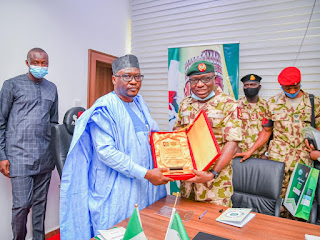 Governor Fintiri gave the advise, Friday in his Office in Government House Yola during a sensitization visit on him by the delegation of Operation Safe Corridor.

He assured his administration readiness to sensitize people on the reintegration of Boko Haram boys who were lured into the sect.

"I commended the efforts of this committee for the good work you are doing on our citizens who at one time have gone astray and joined the dreaded boko haram sect. I think, you deserve a lot of commendation. May God bless you," the Governor said.

He cautiomed the committee to be more vigilant in the reintegration processes, noting that the insurgents' attack is still ongoing while assuring the support of his administration to the committee in Adamawa State.

Earlier in his remark, the Commander of Operation Safe Corridor, Brigadier General Bamidele Matiu Shafa said the delegation was in the Government House on a sensitization mission on the activities of the committee.

He explained that Operation Safe Corridor was established in 2016 to reform voluntarily surrendered Boko Haram members, revealing that so far the committee had reintegrated nine Adamawa indigenes who are rehabilitated. 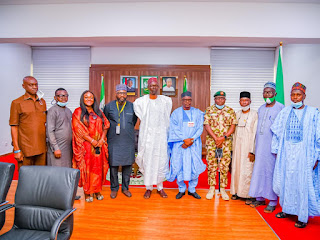 The Commander appeal to Governor Fintiri to aid some mechanisms put in place for reintergrating the repented insurgents.

"My belief of you as very peaceful person is to consider how base Adamawa State would also put in place mechanisms to ensure that these boys from operation safe corridor are well reintegrated when they come, that is the message that CDS asked me to unveiled to you," he appealed" Brigadier General Shafa said.