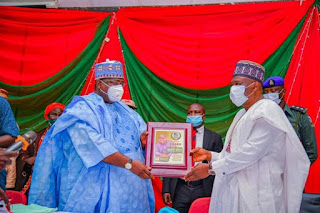 The National President, Nigeria Union of Teachers, Dr. Idris Nasir has commended Adamawa State Governor, Ahmadu Umaru  Fintiri for prioritizing the welfare of teachers in the State.
In the same vain, the Adamawa State wing of the NUT has awarded Governor Fintiri for being the first Governor in Nigeria to extend the year of Service of teachers from 35 to 40 and retirement age from 60 to 65.
Speaking at the eleventh (seventh Quadrennial State Conference of Delegates) of NUT Adamawa State Wing at Lelewal Motel Yola, the National President of NUT said they have received report at their National Secretariat that on assumption in office, Governor Ahmadu Umaru Fintiri has settled five months outstanding salaries of Adamawa State teachers. Adding that he sustained prompt payment of teachers salaries in the State amidst economy challenges cause by coronavirus pandemic.
Responding, Governor Ahmadu Umaru Fintiri said teachers deserves their reward on earth.
“Teachers have always been told to do their Job and expect their reward in Heaven but under my Administration Teachers will get their reward here instead of the hereafter, Governor Fintiri said.
“For me, this a solemn commitment because I will not have been where I am today, just like so many of us without Teachers.
”This is why one of the very first decision taken at the inception of this Government was the extension of years of service for English and Science Teachers by five years”.
“This is in addition to promotion of Teachers in Post Primary Schools and the increase in the allowances of core subjects Teachers”. 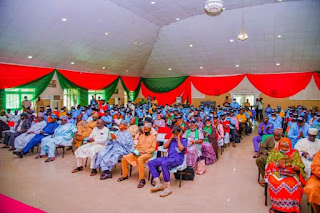 Governor Fintiri assured that his administration will continue with effecting positive development in the education sector while thanking NUT in Adamawa for supporting and ensuring that the verification of Teachers is successfully undertaken.
He assured his administration will respond to other demands of the NUT in the State.
“I have taken note of the requests the Chairman has made which are being addressed notwithstanding the financial crunch which most States are experiencing because of the COVID-19 global Pandemic”, Governor Fintiri said.
”I believe that addressing these complains is a necessary part of our commitment to improving the lot of our Teachers.
”As you begin this conference, I urge you to deliberate on issues that will bring back the lost glory of the Teaching profession and Education in our State and Country at large”.
In his remark, the Chairman Nigeria Labour Congress in Adamawa, Comrade Emmanuel Fashe disclosed that there is cordial relationship between Labour and the Government in the State. Adding that the autonomy given to the State Local Government Council has yielded positive result in payment of Primary School teachers.
He appealed to Governor Fintiri to consider payment of leave grant to the State civil servants for the year 2020 before end of December.
On his part, the Chairman NUT Adamawa State Wing, Comrade Rodney Nathan commended Governor Fintiri for prioritizing the welfare of teachers in the State. He thanked the Governor for clearing 6 months salaries areas to primary school teachers, reinstating 7,825 Primary School teachers who were declared ghost workers to pay roll, implementation of 27.5% allowances to teachers in the Primary Schools among others.
He appealed to the Governor to consider promotion of Primary School teachers who were last promoted 14 years back, implement National Minimum Wage to Primary School Teachers, consider payment of leave grant transport to secondary and primary school teachers which he said the last time they enjoyed was 6 and 7 years back respectively and upgrade yearly increment to Primary School teachers.
07:35
Adamawa Daily Reports
Email ThisBlogThis!Share to TwitterShare to Facebook