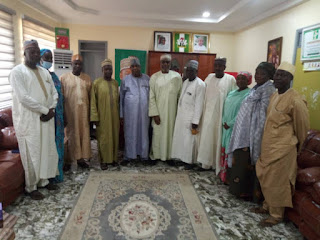 By Daniel M. Zamdayu
The State Hon. Commissioner, Ministry of Local Government Affairs, Hon. Mohammed Umar, has pledged his support to the Adamawa State Agency for Museums and Monuments in carryingout it's core mandate.

The Commissioner made this call when the Director General, Adamawa State Agency for Museums and Monuments Alh. Abdulaziz Usman Duhu and his management staff paid a courtesy visit at his office in yola, State Secretariat Complex.

Earlier, the Director General thanked the Hon. Commissioner  for the support he has been giving to the Agency since his assumption  in office and seek partnership with the Ministry of Local Government Affairs, in discharging the core mandate of the Agency, and also to partner in the establishment of a State Museum Center in which the Agency also  had a  partnership  agreement with a private investor in Abuja.

Hence, as a result of these the agency met with the leadership of the  twenty one (21) Local Government Chairmen, to these effect and they have agreed to partner with the Agency.

Alh. Abdulaziz  seeks the support of the  Hon. Commissioner on the discovery, research and documentation of various sites and Monuments spread across the State, which the Agency intends to commence by November 2020.

He also stressed that, the last discovery done in the State was twenty years  ago that led to the declaration of Hidi palace in Sukur Kingdom as a World Heritage Site.

Responding to the Director General, the Honorable Commissioner welcomed the DG and his Management staff. He ssured the DG of his support and also agreed to partner with the Agency.

He said, he will still discuss further with the Local Government Chairmen on the partnership agreement and to see where they can assist and support the Agency in discharging their core mandate to discover, research and document our historical site and cultural endowment.