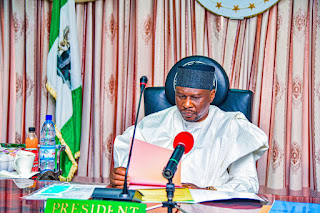 Governor Ahmadu Umaru Fintiri of Adamawa State has  commiserated with the Government and People of Borno State over the killing of peasant farmers  in a village near Maiduguri the State capital.

In a statement signed by the Governor's Press Secretary, Humwashi Wonosikou said Governor Fintiri "describes as unacceptable a situation where innocent Nigerians are killed daily, describing the Borno Massacre as one too many and appealed to those charged with the responsibility of safeguarding the People to rise to the occasion and change the negative narrative of the region".

The statement read in part:

"Governor Fintiri regretted that Governor Babagana Zulum returned from the Yola meeting where Governors of the region had discussed issues of common interest including insecurity and only to be confronted by this ugly development.

"The Governor said "This is a tragic incident, a sad and tragic period for the North East region."

"Rt. Hon. Ahmadu Umaru Fintiri also regretted that security planners "Had failed to come up with a solution or a strategy to prevent such unprovoked attacks"

"Describing it as the bloodiest in recent times with the loss of over fourty people, he said "The risks faced by Borno People have increased as the areas of the State have become less stable".

"Governor Fintiri stated that "It is tough for Governor Zulum, and for the families, this is early part of a new reality without their loved ones", describing the relationship between Adamawa and Borno State as "Historic and honest and a source of happiness, pointing out that whatever affects Borno People affects  us".

"Please accept my deepest condolences and sympathy to the Government, families of the victims and the People of Borno State".