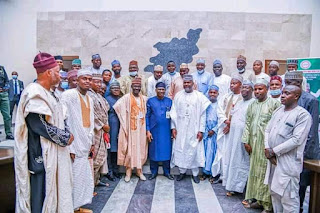 The Governor disclosed this Wednesday, at the Conference Hall, Government House Yola while receiving delegation of Indigenous Consultants and Local Contractors Forum Adamawa State on a courtesy visit.

Governor Fintiri said it is the role of Government to ensure the interest of local contractors are protected in the state and at national level.

He maintained that his administration will continue to patronise local contractors who will in turn help in improving the Internal Generated Revenue of the State.

The Governor warned that his administration will not compromise any standard of the contracts he awarded in the state as his government is convinced it is on the part of success and delivering dividends of democracy to the citizens. Stressing, it was the idea he bagged in the private sector that he is using in developing the state.

Governor Ahmadu Umaru Fintiri called on the Indigeneous Consultants and Contractors to support his administration so as to move Adamawa to greater height.

Earlier Speaking, the Chairman Indigeneous Consultants and Contractors Forum Adamawa State, Alh. Ibrahim Lawan said their visit to Governor Fintiri was informed by the laudable achievements recorded by his administration within short period of stay in office.

He thanked the Governor for patronising them which he said is creating job opportunity to thousand youths of Adamawa whose services were employed by the Indigeneous Consultants and Contractors.

Highlight of the visit was presentation of award of excellence and certificate of registration and membership of Indigeneous Consultants and Contractors Forum Adamawa State by the Chairman Board of Trustees of the Forum, Alh. Abubakar Adamu Konkol to Governor Ahmadu Umaru Fintiri.