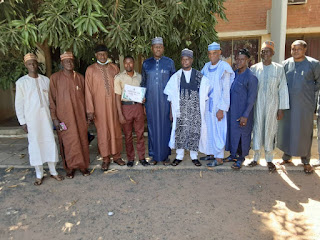 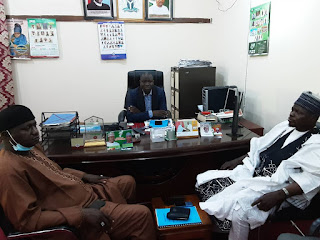 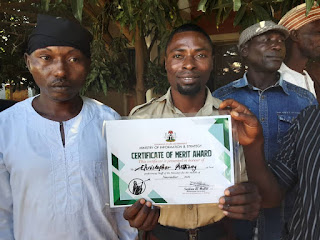 State Ministry of Information and strategy today adhere to the directive of the Head of Civil Service, Adamawa state.

The ministry awarded the most competent and dedicated civil servant.

The event took place today when a committee of the award presented an award  of excellence  to one Mr Christopher Anthony of the Ministry.

The Hon. Commissioner, Comrade Umar Garba Pella, who round up with the fact that when he was consulted about the award issue, he had a mix feelings about it, but only consented to it because it was a directive from the office of the head of civil service of the state, he was also convinced when the awardee was called upon and he saw an agreed consent from his colleagues to confirm it's true he has a reason to believe, the awardee is worth it and congratulated him.

The commissioner only have one regret that the award winning staff was a borrowed staff therefore he challenge the bonifide staff of the ministry to take it upon themselves and be awarded next time.

The awardee responded and thanked the Hon. Commissioner, Management and the entire staff for finding him worthy of the award.

The outgoing Permanent Secretary said he has no regret so far as for his stay in the Ministry as Chief Accounting Officer because he has exhausted what he ought to have done, He thank the staff of the ministry for the maximum cooperation given to him when on sit and asked for the same be done for the incoming colleague.

The incoming permanent secretary thank his predecessor and challenges the  management and staff for the task ahead.