NEWS:ADAMAWA GOVERNOR SWEARS IN AG PRESIDENT OF THE CUSTOMARY COURT OF APPEAL 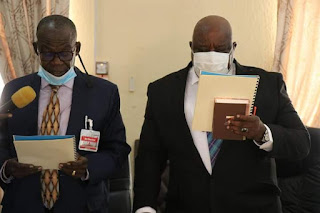 The Governor of Adamawa State represented by the Deputy Governor  Chief Crowther Seth has reassured government's commitment to supporting justice system in the state for better out put.

He gave the assurance at the swearing-in ceremony of the Acting President of the Customary Court of Appeal  in Yola, Justice Peter Wajilda.
The innauguration which held at the conference Hall of the deputy Governor's office withnessed the presence of high court judges, grand khadis among other prominent personalities in the justice system.
On behalf of governor Ahmadu Umaru Fintiri  Chief Crowther Seth thanked the retiring president for his contributions to the growth and development of justice system in Adamawa and urged the new acting president to add on the successes recorded by his predicessor. 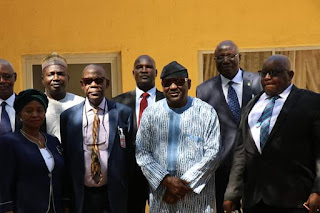 While congratulating the newly sworn-in president of the customary court of appeal sitting in Yola, Justice Peter Wajilda, Chief Crowther said his appointment is based on merit, hence the need to justify the confidence reposed in him
The deputy Governor further re-emphasized that the people's Government will continue to collaborate and support the justice system to regain its lost glory, thereby ensuring good judicial system prevails in the state. He also announced that the Adamawa State Government is set to renovate all courts a cross the state so as to provide a conducive working enviroment to the legal sector. 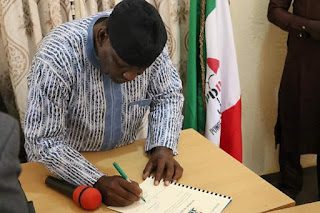 On his part, the newly worn-in president of the customary court of appeal Justice Peter Wajilda appreciated the fresh air government for finding him worthy of the appointment.
He therefore, expressed his resolve to abide by the oath taken and pledge to discharge his duty according to the rules and regulations guiding the justice system.
11:45
Adamawa Daily Reports
Email ThisBlogThis!Share to TwitterShare to Facebook