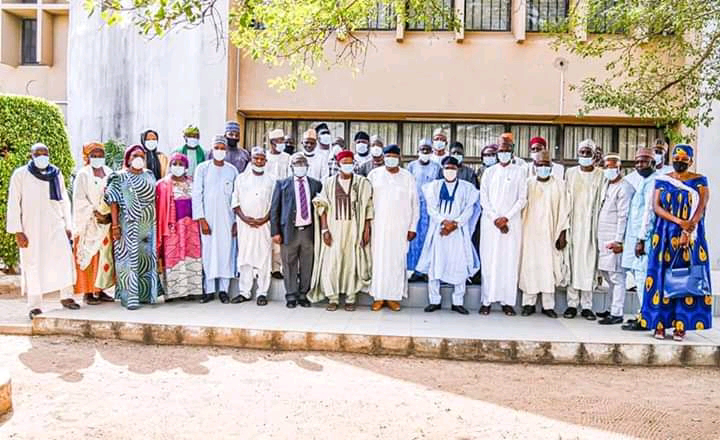 By Barnabas Augustine
21/01/2021
Adamawa State Governor, Rt. Hon. Ahmadu Umaru Fintiri, Thursday, received Adamawa United Forum AUF, on a solidarity visit in Government House, Yola.
Addressing the Forum, Governor Fintiri thanked them for supporting his administration that took over the mantle of leadership of the State in 2019 general polls.
He stated that the Government which AUF supported is doing its best in all facet of development which includes; road infrastructure, health, education, youth empowerment among others.
Governor Fintiri urged the Forum to utilize the strength in diversity it has, contribute their quota to make Adamawa great. He assured that the door of his administration is always open for everybody that will come in with useful advise that will take Adamawa to a greater height.
Earlier speaking, the leader of the delegation who is also the Chairman of the Adamawa United Forum, Mr. Musa Jekeko said they were in Government House Yola for a solidarity visit on Governor Ahmadu Umaru Fintiri. Mr. Jekeko disclosed that AUF gave full support to Governor Fintiri at the last poll. Adding that the Governor has reciprocated the Forum's gesture with appointment of its members in his led administration.
He said the Forum is satisfied with the infrastructure development going on across the State by the Governor's administration. Describing it relevant in the next generation.
Mr. Musa Jekeko assured Governor Ahmadu Umaru Fintiri full support of Adamawa United Forum and will defend it all the time from the clueless attack of the oppositions.
11:53
Adamawa Daily Reports
News
Email ThisBlogThis!Share to TwitterShare to Facebook