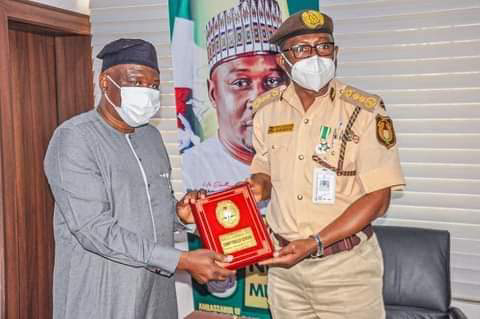 By Barnabas Augustine
11/2/2021
Governor Ahmadu Umaru Fintiri has charged Nigeria Immigration Service, NIS to strengthen security at the various borders to check illegal migrants who perpetrate crimes such as banditry and kidnapping in the country.
Governor Fintiri made this charge, Thursday when he received the Comptroller General,  Nigeria Immigration Service on a courtesy call in his office, Government House, Yola.
Worried by the activities of criminal elements in the State, the Governor noted that most of the cattle rustling, kidnapping, banditry and armed robbery  perpetrated in the State were committed by foreigners who came in to the State from the neighbouring countries.
He call on the NIS to man the porous borders of the State so as to check the excesses of the criminal elements.
Governor Fintiri commended the Comptroller General for being one of the outstanding boss of NIS Nigeria ever produced. Adding, the comptroller General has bring a lot of innovations and gives the Service deserving respect, which reflects in the operations of the NIS.
Governor Fintiri noted the NIS Adamawa Command’s contribution in halting the activities of criminals in the State. He described their effort in manning the borders as exceptional. He assured his led-Government support to NIS.
Earlier in his address, the Comptroller General, Nigeria Immigration Service, CG Muhammed Babandede said he was in Adamawa State to commission some projects executed by NIS in the State.
CG Babandede disclosed that NIS has constructed 2-bed room flats, health facilities and operational offices to help Adamawa Command of the service carried out its operations accordingly.
He commended Governor Fintiri for embarking on laudable projects in Adamawa State which he said is touching the lives of the citizenry.
The Comptroller General thanked Governor Fintiri for providing the State Command of the NIS operational vehicles and other incentives to combat crime.
He charge the men of the NIS not to extort money from the citizenry, saying the service will not take it lightly with such personnel.
Highlight of the visit was presentation of souvenir by CG Muhammed Babandede to Governor Ahmadu Umaru Fintiri.
10:44
Adamawa Daily Reports
News
Email ThisBlogThis!Share to TwitterShare to Facebook