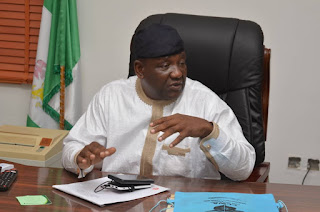 
Ahead of its Local Government Congresses next week Tuesday, the People's Democratic Party PDP in the State has  organised a critical stakeholders meeting where it said consensus method will also be applied during the exercise.

The PDP in Adamawa was among other eight States of Lagos, Oyo, Kebbi and Borno, Kogi, Osun, Kwara and Ebonyi that conducted its ward congresses last week Saturday across the twenty one Local Government areas.

He urged PDP stakeholders in the affected Local Government areas and indeed the state at large to ensure success of the congresses as they have done during the exercise at the ward level in the best interest of the party.

Earlier in his welcome address, the State Vice Chairman Central Zone of the PDP, Alhaji Yayaji Audu Gombi, lauded Governor Fintiri for supporting the course of the party and noted with appreciation the success of the last PDP ward congresses.

The State Chairman of PDP Barrister Abubakar Tahir Shehu, said the party called the stateholders meeting to put its house in order and chart modalities preparatory to a rancour free local government congresses across Adamawa.

Base on the PDP guidelines, Barrister Shehu said local government party chairmen will neither be included in the stakeholders meeting at the local level nor be part of those that will collect elections materials for the congresses.

He urged the stakeholders to also consider fielding in new comers in the PDP who defected from other political parties where there are vacancies as the party never discriminate but carry all members along.

In his vote of thanks, the Senator representing Adamawa South, Senator Binos Dauda Yaroe expressed dismay over some few who have gone contrary to Governor Fintiri's directive during the last Congresses and urged them not to repeat same.

The meeting had in attendance present and past members of the national and state Assemblies, member board of trustee Alhaji Auwal Tukur, Commissioners and local government council chairmen among others.
02:55
Adamawa Daily Reports
Email ThisBlogThis!Share to TwitterShare to Facebook