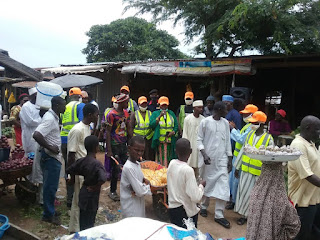 The Staff of Adamawa State Ministry of Women Affairs and Social Development have Sensitized members of the public on Gender Based Violence and passage of the  bill on Violence Against Persons Prohibition in to law. Powered by United Nation Populations Fund.

The Permanent Secretary of the Ministry, Mrs. Saso Benson Ali, who led team of  Social Workers to carry out the sensitization has announced  that  HE, Governor Ahmadu  Umaru Fintiri, has passed a bill on Violence Against Persons Prohibition in to law. She further reiterate that anybody found violating human rights cases that are related to rape will not go unpunished by law.

More over, the Assistant Director in Department of Women Affairs, Mrs. Regina Vincent, enlightened people on the need to report cases of Sexual and Gender based violence to Ministries of Women affairs, Justice, Human rights, Police, Civil defence, Ward Heads and HOPE CENTRE in Specialist Hospital for survivors of rape to get access to free Medical, legal and psycho social support. The number is 07068339913.

In their separate remarks, the Chairman Gamzaki, Yola- south main Market, Mal. Ali Kachalla, commended the team for the enlightenment and challenged the authorities concern to do justice, treat perpetrators  without fear or favour whenever a case is being reported.

Also, the Secretary, Yola -South Market Women Association, Mrs. Serah James, thanked the team and promised to be vigilant as a stakeholder.

Lastly, a member of Jimeta town service union, Mr. Bitrus Kwada,
Warned parents to stop girl child hawking because it expose them to all forms of violence by the people they come across.