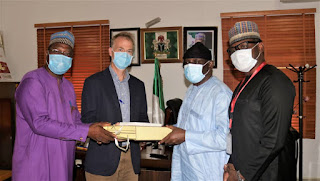 
The officials were at the Deputy Governor's office to seek for partnership and support of Governor Ahmadu Umaru Fintiri's led government for a successful implementation of its programmes which is peoples oriented.

The Global Humanitarian and Development Organisation MERCY CORPS while intimating the Deputy Governor, Chief Crowther Seth on the project said they are in Adamawa to focus on implementating Three projects to include; Small Town watch which deals with the provision of water, and committas focusses on farmer-herder clashes while rural resilience activities deals with Agriculture and rural development for food sufficiency. 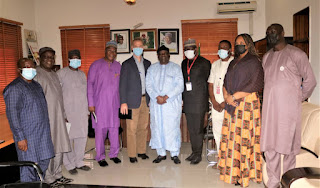 The Regional Director Mercy Corps, Sean Granville Ross said they are out to engage the state government of Adamawa for the successful implementation of their mandate centered on the provision of human and capital development, peace building as well as trust between government and the governed.

Speaking earlier, the Country Director Ndubisi Anyanwu and the permanent secretary ministry of water resources Dr. Sani Shallangwa are hopeful that the projects which is in line with governor Fintiri's led administration will be sustained.

Responding, the Deputy Governor, described the program as timely, noting that it will reciprocate on the gains already recorded by the fresh air government.

He thereafter, assured them of government commitment to ensure the successful implementation of the project for desired result.