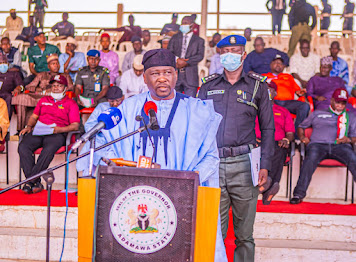 Governor Ahmadu Umaru Fintiri of Adamawa State has said that his administration in collaboration with its development partners will train ten thousand teachers in the state as part of his administration effort in revitalising the education sector.
Governor Fintiri made this known, Tuesday while Adamawa State teachers are making the World Teachers Day (WTD) that was celebrated with  a march pass at the Mahmud Ribado Square, Yola the state capital.

Governor Fintiri who said because of the importance the teachers have in nation building, on assumption of office, his administration has extended the retirement years of service of teachers from 35 to 40 and retirement by age from 60 to 65.
The Governor described the teachers as character modelers and nation builders in all ramification while noting that the theme of this years WTD is in tandem with the philosophy of administration. He said, his government has fulfilled its premise by approving promotion of the teachers who were stagnated for over ten years.
Governor Fintiri disclosed that due to the policy adopted by his administration on education, the performance of the students have improved in West Africa Examination Council (WAEC) and National Examination Council (NECO) and emerging winner in Science and Technology national competitions. 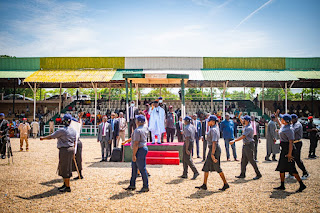 According to Governor Fintiri, if you train a teacher you have trained a nation; assured that his administration shall continue to sustain its policy on education that will make the sector becomes envy of others, while assuring to give what legitimately belongs to the teachers.

Governor Ahmadu Umaru Fintiri promised next year there will be work free day for the teachers if the students are not writing WAEC or NECO while saying his government will in earnest consider the promotion of Primary School teachers.
Earlier speaking, the Adamawa State Chairman of the Nigeria Union of Teachers, Comrade Rodney Nathan said the United Nations Educational, Scientific and Cultural Organisation (UNESCO) and the International Labour Organization (ILO) convention declared 5th October of every year as WTD; saying that the theme for the year 2021 WTD is "Teachers at the Heart of Education Recovery".

He lauded Governor Fintiri for coming up with policies on education beyond politics that resulted in infrastructural development in schools and promotion of Teachers who were stagnated for over a decade.

He noted other land mark achievements of Governor Fintiri on education to include being the first Governor to approve the additional 5 years of service to Primary and Secondary teachers in the state, stability in payment of teachers' salaries, provision of instructional materials in schools among others.

Comrade Nathan however list some of the demands of the teachers in the state to include non-implementation of National Minimum Wage to Primary School Teachers, lack of promotion to Primary School Teachers for over 15 years, non-implementation of promotion benefits to Secondary School teachers among other.
The state NUT chairman assured to give Governor Ahmadu Umaru Fintiri their unalloyed loyalty and support.

On his part the Adamawa State Chairman of Nigeria Labour Congress, Comrade lauded Governor Fintiri for prioritising education in his administration's eleven point agenda and pleaded with the Governor to consider the pressing demands of the teachers.

Highlight of the ceremony was march pass by the branches of NUT across the state and a play let by the Adamawa State Art Council.