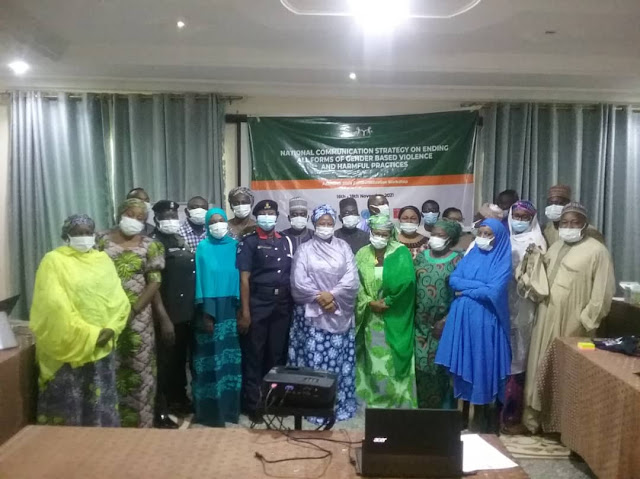 The EU-UN  Spotlight initiative in collaboration with UNFPA with support from the centre of communication and social impact has organised a 3 day  workshop on National communication strategy   on ending all forms Gender Based Violence and harmful practices against women and Girls in Nigeria. Held at Alheri Royal Hotel, Yola.

In her keynote address, the Hon. Minister of Women Affairs and Social Development,  Mrs. Pauline Dame Tallen, disclosed that the overall objective of the training was to strengthen Government’s wide approaches in identifying, coordinating, integrating and leveraging on the current efforts and resources to address Gender Based Violence in a holistic and efficient manner. Other objectives according to the Minister  was to serve as a call for all Federal Government Departments and Agencies including  other critical stakeholders to strengthen their collective efforts in resolving, preventing and responding effectively to issue of sexual and Gender Based Violence and all forms of violence in our societies.

The Minister further disclosed that responding and prevention of violence  against women and Girls is a cornerstone of Government commitment to advocate for women Fundamental human rights as well as promote empowerment of women and Girls. She further called on state Governors, first ladies, Traditional/Religious leaders, gatekeepers and other critical stakeholders  on the need of  implementing of violence against person prohibition act (VAPP 2015)  and  child Rights Act, 2003)  especially the states yet to domesticate the two acts to follow suit as measures towards mitigating the rampant cases of GBV and HP in the country.

She lauded the efforts of European Union Spotlight initiative in sponsoring the projects in the country  and called on the participants to make proper use of the programme by contributing their quota assiduously  towards ensuring all forms of GBV and HP  are eradicated and that perpetrators are brought to book .

Declaring the workshop open, the State Commissioner, Ministry of Women Affairs and Social Development, Mrs.  Lami Ahmed Ga’anda, expressed delight to the organisers of the programme for the steps taken towards curtailing all forms of GBV . She assured the donor agencies on commitment of state Government towards ending GBV  in Adamawa State. Lami, announced that Governor Ahmadu Umaru Fintiri, has passed a Violence Against Persons Prohibition Act (VAPP)  in to law. She called on participants to put what they will learn into practice.

In a paper presentation by a facilitator, Mrs. Sa’adatu Yakubu, took participants on the Four types of  thematic areas viz: Gender Based  Violence, Female Genital Mutilation, Child Marriage and Teenage Pregnancy as well as six mutual reinforce pillars of violence, encephalitis against women namely; Laws and policies on promoting Laws that prevent GBV, discrimination  and address impunity institutions for strengthening federal Government and state institutions  preventing and promoting gender social norms, attitudes and behaviours, services towards ensuring that high quality services for the survivors of violence are available.

Also, Dr. Olayinka Olayode, who is also a facilitator exposed participants on the knowledge of drivers of Gender Based  Violence which include social norms, cultural, religious,  peer group, poor socialisation, low level of women empowerment, lack of social support among others. He called on media personnel  to give their priority in reporting cases and other harmful practices women and Girls are suffering in line with journalistic profession.  He called for  synergy  between Government, CSOs,  police, Ministry of Justice and Media for positive result to be realised in the state.

The participants in attendance of the workshop were drawn from Media, CSOs, civil society organisations, NOA, Ministry of Justice, Health, Women Affairs and social development and State planning commission.

Highlights of the workshop was group work, presentation, and panel discussions between Government, security, CSOs and Media respectively.