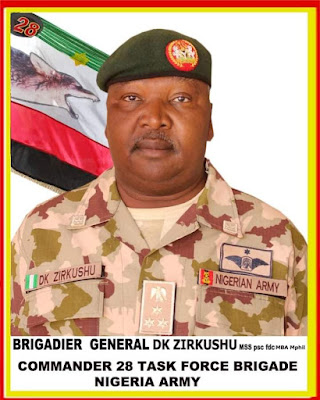 The Adamawa State Governor Rt. Hon. Ahmadu Umaru Fintiri has condole with the families of Brigadier General Zirkushu Dzarma and his colleagues who were killed in an ambush launched on the military in southern Borno State.The Governor described the slain military personnel as brave soldiers who fought to defend the country.

In a statement signed by Humwashi Wonosikou the Press Secretary to Governor Ahmadu Umaru Fintiri said that General Zirkushu was the Officer commanding the 28 Task Force Brigade in Chibok, Borno State.

The Press Secretary explained that the Insurgents had launched an attack on an Army Base  in Askira Uba Local Government area of Southern Borno killing the General and three others.

According to Wonosikou, "Governor Fintiri commended the bravery of the Special Forces  with the support of other troops who repelled the attack by the Insurgents.
Adding that "General Zirkusu and the three others were brave Soldiers who died in the line of duty while fighting terrorists.

"I want to take this opportunity to express my deepest sympathy and that of the Government and People of Adamawa State to the families and loved ones of the fallen Heros. I stand with you. Nigeria stands with you. I deeply appreciate the sacrifice made by your loved ones in defence of our democracy, our peace and our security" the Press Secretary quoted Governor Fintiri in the statement.

The statement further said that Governor Fintiri urged all citizens to remember the families in prayers at "This difficult time", and also urged the families, President Muhammadu Buhari and the Chief of Army Staff "to take heart and bear the irreparable loss knowing that their loved ones died in active service and paid the supreme sacrifice.

"We will not be cowed by these cowards. Our armed forces will continue to fulfil our mission-defeating terror. Our Soldiers' blood will not be shed in vain".
Wonosikou said that the Governor also "expressed confidence that the day is coming when Nigerians will look back at this moment in history and say "Thank God there were courageous people willing to serve because they laid the foundation for peace for generations to come".

"While praising the heroism of General Dzarma Zirkusu and troops fighting terrorism in Nigeria, "Governor Ahmadu Umaru Fintiri noted that "We are on track to victory against evil. My thoughts and prayers go out to families of troops killed in war everyday, not just on the loss of these brave soldiers, but all who laid their lives in supreme sacrifice for the freedom of Nigeria" the statement concluded.