Governor Ahmadu Umaru Fintiri of Adamawa State has said that before the end of his tenure in office, his administration  will construct an additional flyover bridge to ease traffic in the state capital.

The Governor made this known Wednesday while fielding questions from Newsmen during his inspection tour at the ongoing construction work of the grade interchange and flyover bridge at the former Police Roundabout in the State Capital.
Governor Fintiri described the ongoing construction work as excellent and fantastic which he said was what his Government has visualized. Assured that his Government will continue to provide such edifice that will ease the lives of the citizenry, make them happier while fulling the mandate alone the way. 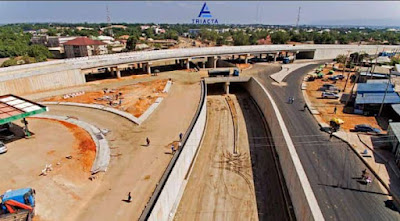 Responding to question to why despite the economic challenges facing the nation the ongoing construction work has not stopped, Governor Fintiri said that this was due to his administration's financial discipline of cutting waste and deploying it to the appropriate channel at the moment. Adding that because of the insurgency that ravelled the state, his government is deploying resources to developmental sector which is yielding positive result.

He assured that his government will continue to abide by the yearnings of the people while thanking them for the support they are according to his administration.
According to the Governor, the date of the delivery of the project is sacrosanct while the date for its commissioning will be decided by the people of the state.