Home » News » NEWS: Adamawa State Government Receives an Award of Excellence for its Support and Contributions to Security outfits in the State.

NEWS: Adamawa State Government Receives an Award of Excellence for its Support and Contributions to Security outfits in the State. 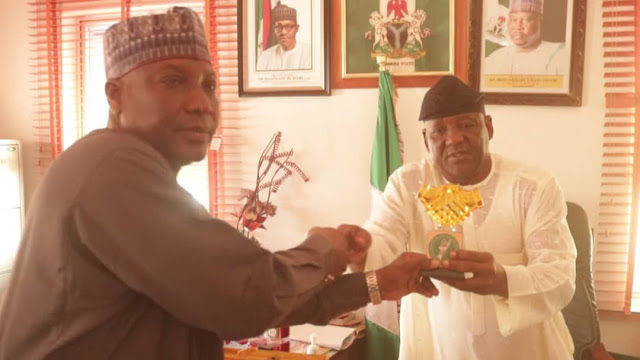 The North East Zonal forum of the State Director's of security service has presented  the Adamawa State Government an Award of Excellence for its Support and contributions to security outfits in the State. The forum also presented a communique on the outcome of their Northeast zonal conference held on Tuesday 7th December, 2021.


Receiving the Award and the communique at his office on behalf of Governor Ahmadu Umaru Fintiri, his deputy Chief Crowther Seth appreciated the forum of the Northeast state Director's of security service for the recognition.

He said their efforts at ensuring the safety of lives and property of the citizens is highly commendable, promising state governments desire and commitment to continue providing needed support to security agencies in securing the masses which is part of governments obligations.

The leader of the delegation who is equally the director security service Adamawa state command Babagana Bulama had earlier intimated the deputy Governor on their visit, noting that the security and development championed by the fresh air government will not go unnoticed.

He said the forum unanimously agreed to present an award to governor Fintiri in recognition of his outstanding performance in the area of security and a communique on their just concluded northeast zonal conference of state directors of security service to keep the government abreast on the resolution reached for a common goal.

The forum further pledged to continue working in synergy with government and other security outfits geared towards surmounting security threat poised by insurgents among other terror groups for lasting peace and development.