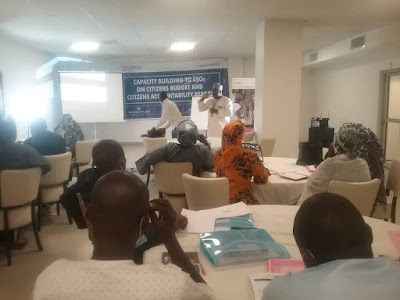 The USAID State Transparency And Accountability Activity has organised a two-days capacity building workshop to community social organisations, faith based organisations and staff from Ministries, Departments and Agencies  on citizens budget and citizens accountability report. Held at AUN Hotel, Yola. 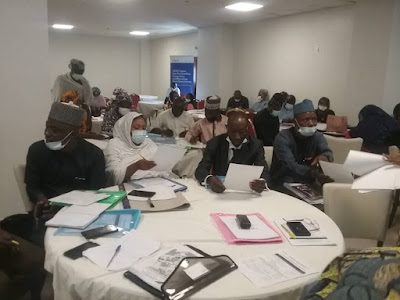 Declaring the workshop open, the state team lead, Mr. Machill Maxwell, stated that the workshop is geared towards creating awareness and synergy between Government and citizens on the need to have an insight on people’s needs by the Government  and on the other hand it will give room for  community social organisations to have deep understanding of Government’s budget and how the Government spent the allocated amount of money for developmental projects.
The participants were exposed to the concept of ‘Citizens Budget’  by a facilitator, Mr. Emmanuel Bwala, he defined Citizens   Budget  as a simple presentation of  budget in a way that a lay man/ audience is able to understand and digest. He added that some states presents citizen’s budget in local languages for easy understanding of budget by all classes of citizen.’ Citizens Accountability Report’ as a simple representation of the end of year financial repot of the Government.

In an interview with participants, the Women leader, people living with disabilities Mrs. Godiya  Simon, said people living with disabilities are left behind in Citizen’s Budget preparation and Accountability while they have the right and percentage in the budget but they are not being carried along. She called on members of their association to attend and contribute in budget preparation whenever they are invited.

Moreover,  The Chairman House standing committee on budget appropriation, Mr. Clerkson Gajere, stated that whenever State House of Assembly is set for budget accountability  they communicate  to Community Social Organisations, Religious leaders and other members of community to Come and tell Government their priorities in their various communities, then, the legislatures note it and report it Executive to ensure they accomplished people’s needs. Thereafter,  technical committee  will supervise the projects to find out whether they are well executed.