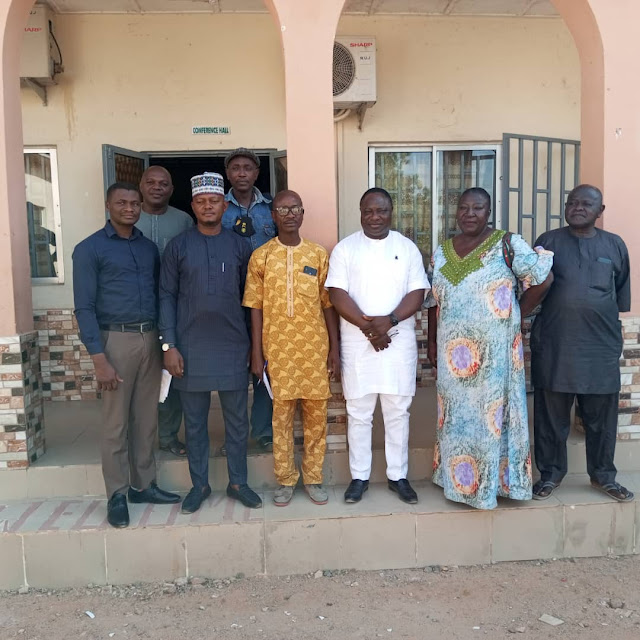 31/1/2022
Eight years after, Adamawa State Sports Writers Association of Nigeria (SWAN) is set to hold sports week for media houses in the state.
This was disclosed, Monday by the Adamawa SWAN Chairman, Comrade Samuel Gangwaja at the inauguration of the Organizing Committee of the state SWAN Week 2022 at the NUJ Press Center in Jimeta-Yola.

Comrade Gangwaja explained that SWAN week is an annual event designed by the national Secretariat for all State chapters to key into the programmes geared towards bringing unity and friendships among media workers.
He added that the association in the state have set in motion machinery of ensuring that the 2022 sports week recorded a success.

"We are packaging a programme that will stand the test of time in terms of Organising the media games, and the recognition awards to those who are contributing to the development of sports in the state" Comrade Gangwaja said.

The Adamawa State Chapter of SWAN Chairman revealed that the Sports Week will be a ground for selection of athletes that will represent Adamawa at the North East Zone SWAN Games which Gombe will host before the end of the year
While inaugurating the main organizing commitee, Comrade Gangwaja said that those that were selected to serve as commitee are hardworking and dedicated members of the sports writers association.

According to Comrade Gangwaja, the terms of reference of the main organizing commitee to include ensure only members of the media are eligible to take part in the games; the age limit of the participants shall be 35 years and above to restore the beauty of the event; and to ensure that all those who contributed or are still contributing to sports development receive the recognition awards.
He disclosed that five games of football 5 aside, tennis, volleyball, table tennis and badminton will be featured in the sports week with a kick off date, first week of April, 2022.

Those inaugurated as the main organizing commitee for the 2022 SWAN Sports Week in Adamawa include Comrade Zare Baba to serve as Chairman while Comrade Victoria Taduwokai, Comrade Percy Dabang and Comrade Austin Ajayi will serve as members and Comrade Ephraim Okpanachi will be the Secretary.
The Award Sub Committee has Comrade Austin Ajayi as Chairman, Comrade Victoria Taduwokai as member and Comrade Jessica J. Bakari as Secretary while the  Games Sub-Committee will be Chaired by Comrade Percy Dabang, James Bongar as member and Yusuf Jika as Secretary.

The Finance/Contact Committee has its Chairman, Adamawa State Chapter of SWAN; Members, Other excos, Zare Baba, Victoria Taduwokai and Austin Ajayi.
In his acceptance speech, the Chairman of the Main Oganizing Commitee of 2022 Adamawa State SWAN Sports Week, Comrade Zare Baba assured that his committee will work as a team for the huge success of the Sports Week.
He called on sports enthusiasts, Government, veterans among others to open their doors when ever the committee contacted them for assistance or advice.

In their separate goodwill messages, one time Chairmen of SWAN in Adamawa, Comrade Victoria Taduwokai, Elder Gyang Pam and Comrade Austine Ajayi enjoined the SWAN not to be crippled by the period of not observing the sport week in the state; reminding the SWAN that as journalists they have role to play in informing the general public on the happenings in the world of sports while charging the 2022 SWAN Main Committee to focus and execute the responsibility given to them accordingly.