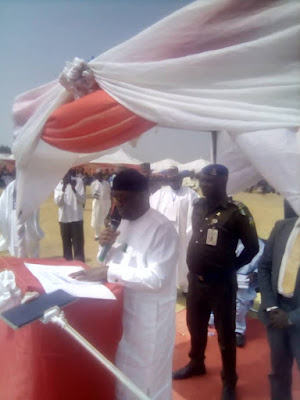 The Executive Governor gave the words of commendation at a grand civic reception organized in honour of four illustrous sons of Hong local government for excelling in to key positions in their respective places of work. The reception organized by Hoba language development Association was held at the staff school football field, college of education Hong.

He said Kilba sons and daughters are the source of pride to Hong, Adamawa and the country in general owing to their resourcefulness in different facets of life..

The Governor maintained that the upliftment of the celebrants could not have been possible without being committed and dedicated to their work, urging them to maintain the spirit.

On the other hand, the Secretary to the Government of the federation, Barr. Boss Mustapha represented by Dr. Nuhu Maksha, the Chairman of the occasion Engr.  Doctor Aminu Abdulkadir Mbamba and the father of the day General Aliyu Kama had earlier congratulated the illustrious sons of the soil, for excelling in their various fields, advocating for respect to traditional institutions and unity in Kilba land.

Having reminded the celebrants that to whom much is given, much is expected, they commended governor Fintiri for championing both infrastructural and human capital development.

The stakeholders further urged them to maintain good working relationship with indigines and non indigines irrespective of tribe, religion or region as they use their wealth of experience and knowledge in developing kilba land and beyond.

The host and the provost college of education Hong Dr. Benson Yusuf Baha showered encomiums on the celebrants, advising them to be just and fair in discharging their duties, even as he prayed God to order their steps for a greater kilba land and the development of the entire nation.

On behalf of the celebrants Justice Nathan Musa said the honour serves as a challenge for them to work harder in their career, promising to make Kilba community proud.

Justice Nathan also thanked governor Fintiri for always identifying with Hoba or Kilba people, assuring that they will not let him down.

The peak of the reception was the presentation of gift to governor Ahmadu Umaru Fintiri and the celebrants while cultural troupes display their talents to the admiration of guests.