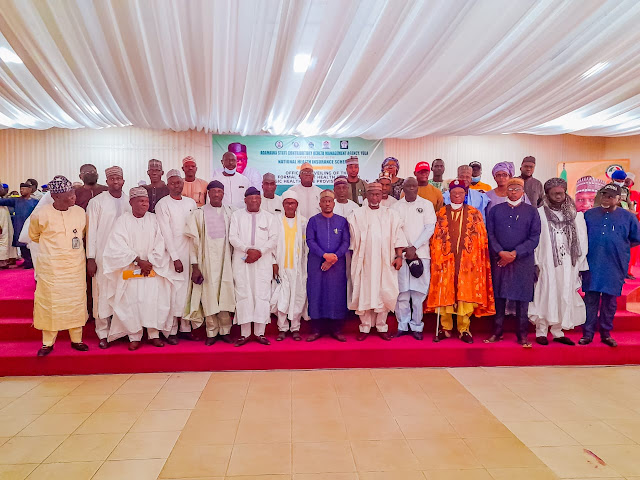 Performing the ceremony, Monday at the Banquet Hall Government House Yola, Governor Fintiri said that through the health scheme, his administration has provided a preventive, curative and rehabilitative health services with sufficient quality and equitable delivery without subjecting the people to financial hardship.
He stated that the fundamental objective of the Insurance scheme is to create a Health Management Scheme which will mark a major milestone towards healthcare without paying at the point of access.

According to Governor Fintiri, at the time he took over government in May, 2019, the health system of the state was at its lowest ebb, with maternal mortality at 576/100,000 live births, under five mortality at 132/1,000 live births while 76 percent of Adamawa citizens pay out of pocket to access health services.
Adding that the civil servants in the state had no health insurance coverage and had to pay huge medical bills out of their lean pockets. He said his administration has invested huge resources to reverse the ugly trend.

Earlier, the Executive Secretary  National Health Insurance Scheme, Prof. Nasir Mohammed Sambo disclosed that the scheme was in tandem with the global health care delivery service. Adding that the National Health Act of 2004 was enacted to improve health service delivery in the country.

He revealed that Adamawa is among states that have fulfilled condition to access the disbursement fund for the health insurance scheme while disclosing that Adamawa has received N850 million for the scheme, opening a window for the improvement of the health of the citizenry.

The Executive Secretary lauded Governor Fintiri for recruiting considerable number of health workers to improve health servicedelivery to the people of the state.
In his welcome address, the Executive Secretary ASHCMA Dr Amos Ujulu disclosed that the agency was established in 2011 with two office rooms. He said that Governor Fintiri prioritized the health sector in his 11 point agenda, gives the agency structure a new facelift in addition assented to the bill, AGS No 18 of 2018 which appropriate at least one percent of consolidated revenue as equity fund to cover the vulnerable under the slogan 'Fintiri Care'.

The ES ASHCMA said so far over twenty nine thousand people across all the 226 political wards in Adamawa benefitted from the scheme; covering people with disability, internally displaced person's, indigents among others.
Key stakeholders of the health insurance scheme the traditional rulers through the Hama Batta HRH Gladsom Teneke, Labour leader in the state Emmanuel Fashe among others assured to sensitize their people on the scheme as well as give their maximum cooperation for. The success of the programme.