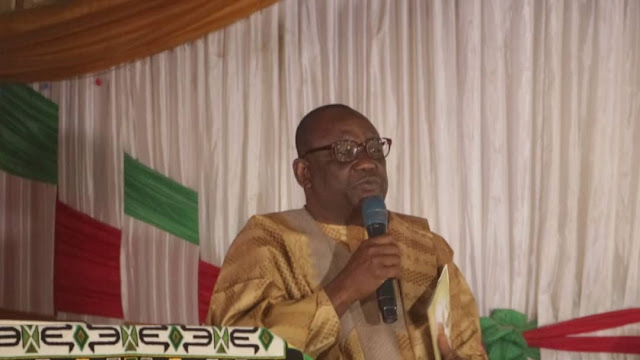 The remains of late Mama Rhod David Lawal was laid to rest in her home town Kwambla community of Hong local government area, Adamawa state.The deceased was a mother to the former secretary to the government of the federation Babachir David Lawal.

Kwambla community, was alive with sympathizers from all works of life, demonstrating their solidarity, sympathy, love and concern to the bereaved former SGF Babachir David Lawal in his moment of grief.

In his condolence message at the funeral service held at EYN Church Kwambla, Governor Ahmadu Umaru Fintiri through his Deputy Chief Crowther Seth console Babachir David Lawal and the entire family over the demise of their dear mother, saying the people and the government of Adamawa share in their pains.

Governor Fintiri encouraged them to seek comfort in God, the giver and the taker.

While saying he received with shock and sadness the news of the death of Mama, the Governor described her as an epitome of discipline, compassionate and valuable community leader whose life style is a lesson worth emulating.

The Chief mourner, Babachir David Lawal appreciated Adamawa state government among other sympathizers from all works of life for identifying with him in such a sad moment, stressing that he will live to remember his mother for her supportive, cheerful, generous, peace loving and philanthropic nature.

The preacher Reverend Dauda Haruna who took scriptural reading from philipians chapter one verses twenty to twenty four admonished Christians to live a Godly life, love one another, live in peace and unity as death awaits every living creature.

He centered his message on "Death and life", advising the congregation to shun sinful acts, and hold unto the life that will bring honour to Jesus Christ, maintaining that there is life after death.

Late Mama Rhoda David Lawal was born in 1934 and was called to glory on 18th January, 2022 at the age of 88 after a protracted illness.