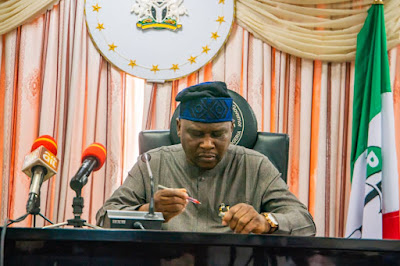 Governor Fintiri charged the Chairmen in a meeting at his instance at the Council Chambers of the Government House Yola.
Governor Fintiri said that the Transition Committee Chairmen were carefully and meritoriously selected to serve their people.

He disclosed that one of the reasons he called the Chairmen for a meeting is on their primary responsibility of working with the security agencies which is paramount in stabilizing their LGAs. Saying if they succeeded in rearranging the security network, they will write their names in gold. 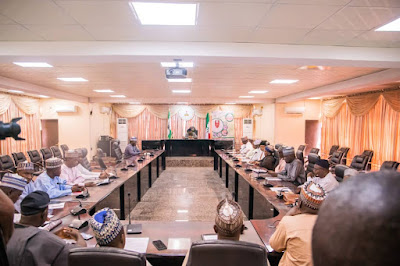 Governor Fintiri enjoined the Transition Committee Chairmen not to embark on projects that they will complete within the three months that they will be in office while noting that Government is a continue process.

The Governor charged the Local Government Transition Committee Chairmen to work with all their stakeholders and the People's Democratic Party in their LGAs as soon electionary campaign for Local Government Areas election will be flagged off.
He called on the Chairmen to ensure that PDP maintained its dominance in their areas of jurisdiction.

Earlier, the ALGON Chairman who is also the Transition Committee Chairman of Toungo Local Government Area, Engr. Suleiman Gangkuba thanked Governor Ahmadu Umaru Fintiri for given them opportunity to serve their people. He assured the Governor that he will not disappoint the confidence repose on them. He assured that the Chairmen will work with their critical stakeholders and the party while congratulating Governor Ahmadu Umaru Fintiri for embarking on laudable projects that touches the lives of the citizenry.