NEWS: Community Social Organisations Acquires Knowledge on How Citizens Budget is being prepared. 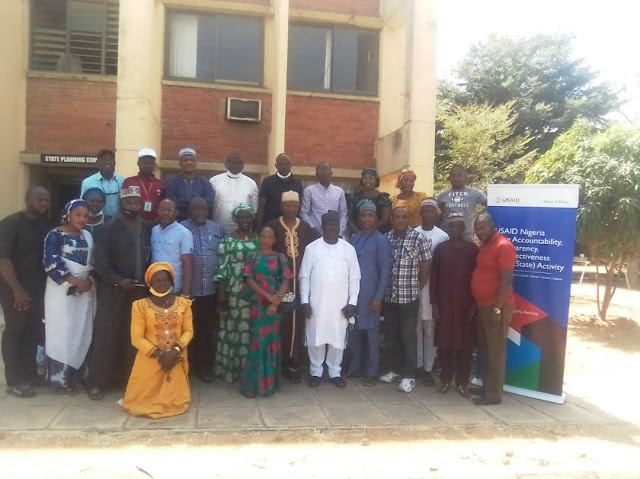 For the first time in the  history of  Adamawa State,  community social organisations were taught  on 2022 citizens budget preparation. The four day exercise was organised by USAID  State Transparency  Accountability and Effectiveness Activity, in collaboration with State Planning Commission, which was held at conference hall, of the  Ministry.

The USAID State team Leader, Mr. Maxwell Machill, described the exercise as  the  first time of engaging citizens to have an idea on how  Government’s  budget is being prepared,  it is   a means of enhancing effectiveness and efficiency of  budget, it brings citizens into  the process of budgeting.  He warned community social organisations not to use the opportunity to humiliate Government. Mr. Machill,  further called on them to ensure the  budget prepared is been monitored as well as ensure it  is the one presented to  legislature in State House of assembly. The team leader also, called on Community social organisations to  disseminate what they will  learn  to members of their various  organisation.

The Permanent Secretary, State  Planning Commission, Mal. Usman Hamman Mapeo, described  the exercise as a welcome development because it will enhance efficiency of budget development and transparency in Government which will give citizens a sense of belonging.

The four day exercise exposed the community social organisations in having  an indepth  knowledge on;  review and  summary of 2022 budget, brief look at the citizen’s budget template, population of citizens budget template, Transfer of data from  excel document to word document and lastly, transfer of the document in to Hausa language for easy understanding of  citizens.

Similarly, the Director of Tax  of  Adamawa State Board of Internal Revenue Mal. Salihu Sabana, encouraged the community social organisations to sit on round table with stakeholders, discuss on what they need and  identify various entry points and channel their needs  for Government to take into consideration.

Those who facilitated the exercise are staff from Accountant Generals office, Adamawa Board of Internal Revenue, officers from State Planning Commission as well as  Ministry of Finance.

In an interview with the chairman, Adamawa State community social organisations Mal.  Nasir Adamu, Said he is overwhelmed to be opportuned to have an idea of how citizens budget is been prepared. He commended the present Government for being transparent to her citizens.

Also, the presentative of Adamawa state good governance, Muhammed Ismail, commended Governor Ahmadu Umaru Fintry, for incorporating civil society organisations in to budget preparation is a welcome development, because it will address issues of misconception between government and the governed in regards to budget marginalisation.

Also, the president, student union in  Federal college of education Yola,  Comrade Sulaiman Abdullah,  lauded organisers of the exercise for carrying members of community along to have an idea of how the budget is been prepared.