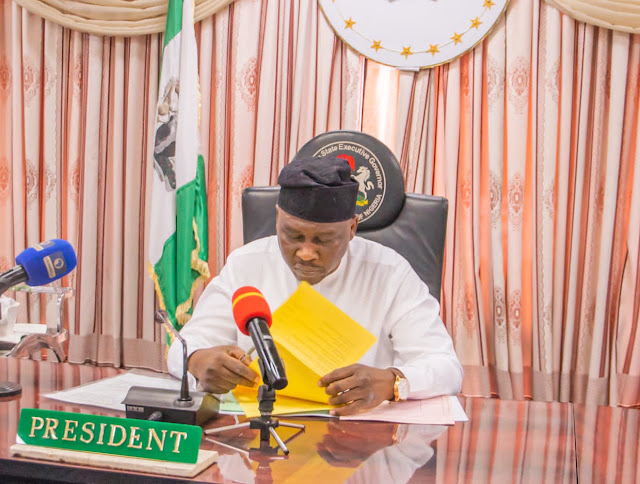 The Adamawa State Executive Council in its second meeting for the year 2022 presided on Monday by Governor Ahmadu Umaru Fintiri at the Council Chambers, Government House Yola, has approved over one billion naira contract variation for the Grade Interchange under construction in Jimeta in the state capital.
The Council has also approved Adamawa State to host the 44th National Council on Establishment Meeting.

Briefing newsmen after the meeting, the Commissioner Ministry of Information and Strategy, Dr Umar Garba Pella disclosed that the Adamawa State Executive Council has approved one billion, three hundred and thirteen million, six hundred and seventy five thousand, eight hundred and and twenty two naira, seventy four Kobo (N1,313,675,822.74k) for the variation of the contract for the design and expansion of the Grade Interchange.

Dr Pella explained that in July 2022, the contract for the construction of the Grade Interchange was awarded at the cost of five billion, eighty nine million, five hundred and eighty thousand, eighty seven naira, sixty eight kobo (N5,089,580,087.68k) and so far, about four point five billion naira has been paid to the contractor.
He disclosed that the contractor, MSSR Triacta Nigeria Limited has executed the contract to 95% with the expected quality and timely delivery.

According to the Commissioner of Information and Strategy, the reasons for the variation are among others the emerging need for the expansion of the project, associated high cost of compensation, need for installation of CCTV cameras to improve security around the interchange, provision of wire fencing to prevent vandalisation and misused of the under flyover, increase indepth of pipe and increase in the work of the excavation.

With this development, Dr Pella said that the total cost of the construction of the Grade Interchange will be six billion, four hundred and three million, two hundred and fifty five thousand, nine hundred and ten naira, forty two kobo.
Contributing, the Commissioner, Ministry of Works and Energy Development, Alh. Adamu Atiku said that another reason for the approve of the variation was as the result of the cost of building materials. He said that in the next two months all will be set for the commissioning of the project.

Dr Umar Garba Pella explained that the Council received and deliberated on an information memo from the office of the Head of Service on the National Council on Establishment (NCE).

He said the Council was intimated with the report of the 43rd NCE that was held in Abuja between 24th and 25th February in which the meeting has a lot to do with the desired reform in the Civil Service.

The spokesman of the Adamawa State Executive Council Meeting disclosed that the Council has approved the request of the NCE for Adamawa State to host its 44th meeting slated for 4th quarter of the year 2022.