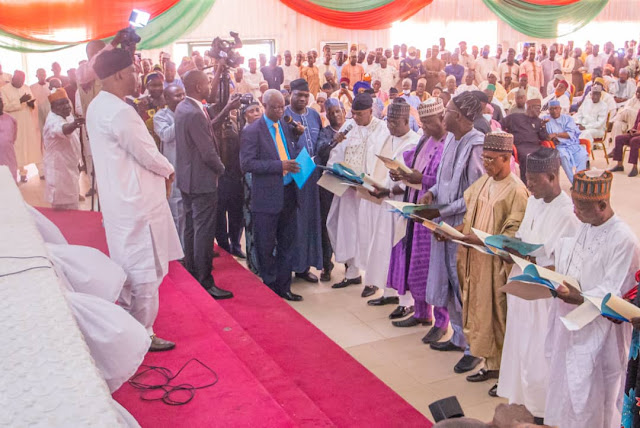 Governor Ahmadu Umaru Fintiri has precided over the swearing in of ten Permanent Secretaries into the Adamawa State Civil Service.

Presiding over the ceremony, Monday at the Banquet Hall, Government House Yola, Governor Fintiri said that for the past two years his administration has strengthen the Civil Service for optimum performance through deliberate and fortifying reform that is aimed at repositioning the service for enhanced productivity.
Adding that his government believed  that it can’t build a modern Adamawa State without a modern Civil Service.

Governor Fintiri explained that his administration has checked the irregularities in the appointment of Permanent Secretaries hitherto perpetrated in the state.
"We have subdued mediocrity and upheld the triumph of merit in progression in the service. We have overhauled the process of selecting candidates for appointment as Permanent Secretaries in the State", Governor Fintiri said.

"To engender transparency and ensure appointments to such exalted position are done purely on merit devoid of parochial considerations, we have introduced examination to be conducted by an independent examiner - the Administrative Staff College of Nigeria (ASCON). And ensured that the result of such examinations is made public.

"I reiterate my confidence in the selection process and call on the Head of Service to ensure that it remains transparent, meticulous and credible".
While congratulating the newly sworn in Permanent Secretaries, Governor Fintiri urged them  to justify their performance in the examination with their  performance in office.

"Now more than ever before you are ushered into the hall of leaders in your respective capacities. Leadership doesn’t mean learning the jargon of management. Rather Leadership is about taking the task at hand, and inspiring others, confident in their ability, and empowering them to deliver" Governor Fintiri stressed.
"It’s about expressing views straightforwardly and with clarity, upwards as well as downwards.It’s about innovation and problemsolving. You are coming on board at a very critical time when we are wrapping up our successes in the execution of our 11-point agenda amidst precarious social, economic and political climate".

Earlier speaking, the Adamawa State Head of Service, Dr Edgar Amos Sunday said that the processes followed in the selection of the Permanent Secretaries marks the sincerity of the prospect, deligent, transparent in outcome, fruitful in expectation and impact to the Civil Servants, Government, and the larger Adamawa society.
He said the examination for the selection of the candidates for the position of Permanent Secretaries was conducted by a reputable Administrative Staff College, Badagry. Maintaining that the process is objective, credible and transparent which was why the result was announced publicly.

The oath of office and secrecy was administered by the State Attorney General, Barr. Ephraimu Jingi.

Those that were sworn in for the position of Permanent Secretaries are from seven Local Government Areas that have vacancies, include from Lamurde LG:
Mbi Deborah and Cletus Hilkiah; Fufore LG: Yahaya Sule; Yola North LG: Aishatu B. U. Rilwan and Girei LG: Linah M. Ndesah.