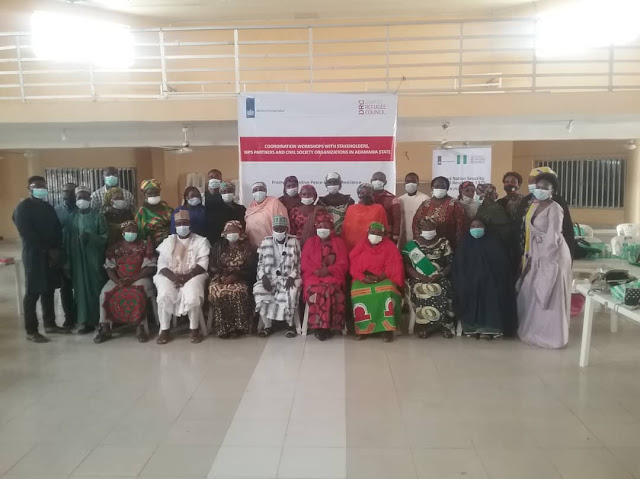 Declaring the programme open,  the Permanent Secretary, Ministry of Women affairs and social development, Mrs. Saso Benson Ali, commended Danish Refugee Council for giving Adamawa women the liverage - opportunity  to decide on what they want for themselves. She called on participants to do justice on whatever they will discuss for the good of Adamawa women because every stakeholder is carried on board to deliberate on issues of peace and security.

Also, in a remarks by the Peace Building Officer, Danish Refugee Council, Mrs. Bintu Abdul, said’ the programme is aimed at looking into challenges on issues of security and peace building  faced by women and Girls and to proffer solutions on how these issues could be addressed. She called on participants to digress-delebration and Leave no stone unturned so as to liberate women and Girls from the sufferings of insecurity.

The participants were presented with an overview of the first Adamawa State Action Plan by a resource person, Dr. Hassan Misari, in his presentation, he stated that UNHCR 1325 came on board because women and Girls are being excluded in security engagement. Therefore,  the women peace and security programme seeks to enlighten and increase women engagement in leadership position  and decision making with respect to peace and security structures and institutions, advanced  gender equal opportunities and help ensure the protection of women and Girls from violence and conflict settings. He announced that Adamawa State is among the first few states that launched her action plan on women peace and security in the year 2017.

The facilitator, further  enumerate and explained the five pillars of  the Action plan thus; Promote, protect, prosecute, prevent and partnership.

The participants were later grouped in to four groups to deliberate on the current security challenges/emerging  insecurity faced by women, state peace architecture and level of women involvement in key decision making, processes.

After a successful deliberation, the groups came up with the following security challenges thus: the most common one is Shila Boys, Rape, Kidnapping among others.

On the other hand, the level of women engagement in key decision making processes, it has  been confirmed that, Adamawa state has Only 1 female legislative in state House of assembly, out of the 25 legislatives, only 4 female commissioners out of 24 comissioners,7 permanent secretaries, and about 600 women were giving traditional titles at various local government areas.

In the second group presentation, the participants came up with the following recommendation; There is a need for creation of more awareness on the need to engage women in peace building, also, there is need for all community social organisations, ministries departments  and agencies, Private organisations and other stakeholders to work in synergy so as to achieve desired goal, men should be sensitized to carry women along in decision making, give women opportunity  to attend meetings and lastly, women should support and encourage their female counterparts.