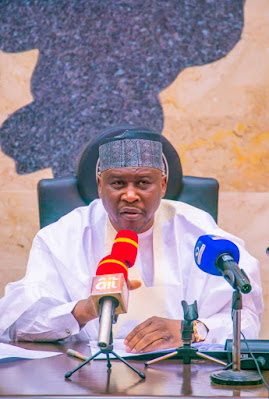 In A statement signed by the Press Secretary Government House Yola, Mr Humwashi Wonosikou said the curfew which was 10pm to 5am is now eased to commence from 11pm to 5am daily during the period of the Ramadan Fast and the review takes immediate effect.

The statement reads in parts:
"The development is to enable the Muslim faithful partake in tafsir sessions during the period", the Governor said;
"Government had in February 2021 imposed a night curfew on the three local Councils through the Adamawa State Restriction of Movement of Tricycles/Motorcycles Executive Order No.1 of 2021. "

"The order is meant to check the excesses of hoodlums terrorising the areas prescribing a sentence of six Months imprisonment with an option of fine or both in addition to forfeiting the Tricycle or Motorcycle.

"The review of the Restriction of movement is necessitated by the desire of the Government to allow Muslim faithful observe unhindered Tafsir at their various Mosques during the Ramadan period.

"Governor Fintiri however directed security agencies to beef up security across the State especially in the three councils of Yola North, Yola South and Girei by deploying more service personnel to keep watch and ensure the security of lives and property of residents of the State, warning that anyone found wanting will be made to face the wrath of the law.

"The Governor added that Security agencies will continue to discharge their duties and residents are urged to cooperate with them to maintain the status of Adamawa State as one of the most peaceful.

"While wishing the Muslim  Ummah a peaceful Ramadan, the Governor urged residents to maintain the hard earned peace restored by the administration in the State.

"It appealed to residents not to encourage any action that may turn back the clock, but to keep living in harmony and strengthen the unity and peaceful co-existence the people are known for".