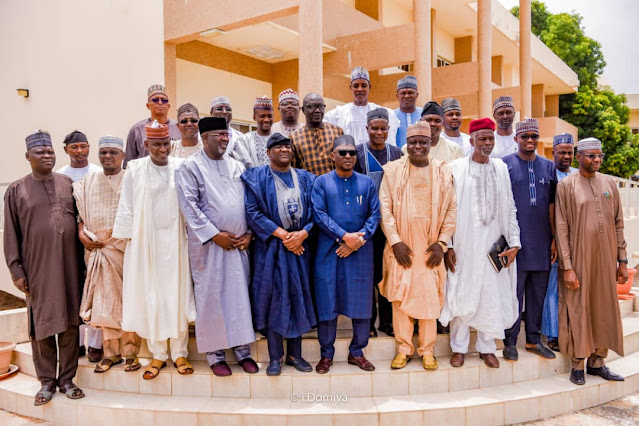 Governor Ahmadu Umaru Fintiri has reiterated that he will not relent in his effort to deal with criminal gangs perpetrating criminal activities in Adamawa State. The Governor made the emphasis, Wednesday while receiving the twenty one Local Government Area Chairmen on Sallah hommage on him in Government House Yola.
Governor Fintiri stated that recently the Shilla cult boys who were known for various criminal activities have rekindle their criminal activities, disturbing the peace of the State.

He noted that the sponsors of the Shillah boys, have started reawakening the cult group criminal activities because election is coming soon. He assured that he will take the fight to the street with them untill they are no more.

Governor Fintiri warn politicians to play politics according to the game, saying if policians unleashed criminality against the State, his administration will bring them to justice.

He lauded the 21 LGAs Chairmen for the achievements they so far recorded in securing the lives and properties of their citizens as Chief Security Officers in their respective LGAs. He said they achieved alot because of the energy in them, capacity, the understanding of their environment and their resourcefulness while urging them to continue with the good work untill they flush out all the criminals in the State.

Governor Ahmadu Umaru Fintiri urged the citizens to continue praying for the recovery of the national economy, so that Nigerians will see the better part of their lives.

Earlier, the ALGON Chairman and Executive Chairman, Song Local Government Area, Hon. Gidado Abdulsalam, who led the delegation of the 21 LG  Chairmen said they were in Government House, Yola to brief Governor Ahmadu Umaru Fintiri how they conducted the security during the 30 days fasting and sallah celebration in their respective LGAs.

According to Hon. Abdulsalam, the Sallah celebration was hitch free of any threat from any criminal elements. He said that this was achieved due to adherence to the order given to them by Governor Fintiri to deploy all necessary strategy that will help in securing their LGAs from miscreants.

They assured support to Governor Fintiri's led administration to achieve it's set goals and the actualization of the Governor's victory in the 2023 general elections.