Home » News » NEWS: Stakeholders Deliberate on how to Avert Human Trafficking in the State

NEWS: Stakeholders Deliberate on how to Avert Human Trafficking in the State 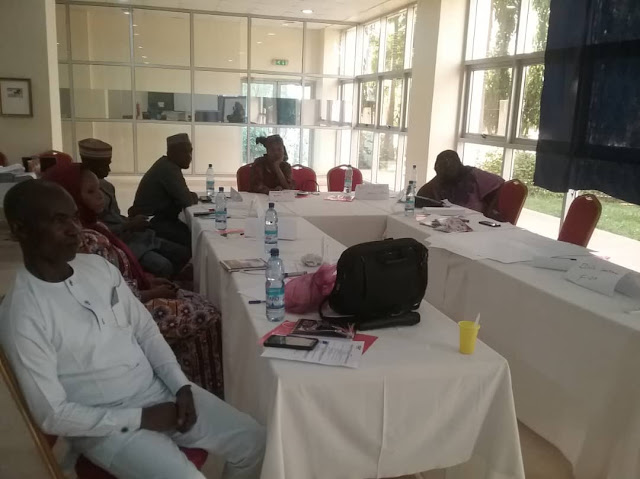 The Heartland Alliance International in her efforts to end human trafficking in North East Nigeria, has organised a group discussion with stakeholders to deliberate and put together a standard document for averting trafficking in Adamawa state. The meeting took place at AUN Hotel, Yola.

The Heartland Alliance is a human right based organisation globally, it strengthen the services for social service providers to respond to trafficking . It also, provides technical assistance for National Agency For The Prohibition Of Human Trafficking In Persons.

The Heartland Alliance International Project Manager, Miss Shikse Peret  Patience, said the meeting is aimed at assessing the participants knowledge on human trafficking, their capacity, resources needed and what is lacking in addressing trafficking in Adamawa State. Miss. Patience, gave  an overview of trafficking where she said ‘trafficking is the conveyance of a person from  one location to another, it could be either within a particular location, inter- state or abroad. It could either be with or without  consent of the victim or his/her parents.

The Participants were grouped in to various groups to discuss on trafficking issues, social services needed, case management, capacity and resources available, cultural attitudes, perceptions and practices in the State.The Stakeholders reviewed findings based on  the discussions made comments and a standard document is produced to be presented to state Government for  implementation.

In an interview with the NAPTIP Adamawa  State Commander, Malam. Adamu  Ibrahim Bah, said one of the  the success story recorded is that  his organisation in collaboration with police and the district head of Sukur community in Madagali local Government of Adamawa State  has rescued and re-unites 26 children with their families. He laments that so far, NAPTIP  lack shelter to keep victims before re-uniting them  with  their families. He appealed to Government to provide shelter  for  survivors of trafficking.

Also, the representative of National Orientation Agency, Malam. Mu’awiya Abba Zumo, described the programme  as timely, because human trafficking is a criminal offence. He added that his organisation will sensitize the public the subject matter, it’s dangers and the laws against trafficking.

Highlights of the programme was group discussions, presentations, questions and answers.