Home » News » NEWS:Gov Fintiri Presides Over Swearing in of Judges in Adamawa.

NEWS:Gov Fintiri Presides Over Swearing in of Judges in Adamawa. 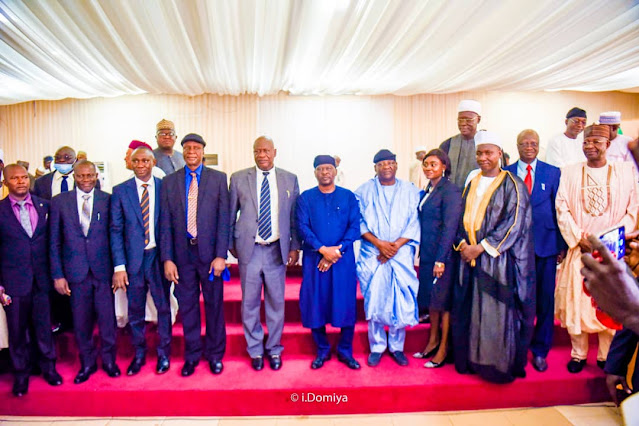 Congratulating the new Judges for rising to the pinnacle and becoming top functionaries in the Temple of Justice, Governor Ahmadu Umaru Fintiri said that he has made a solemn vow to spearhead the drive to restore sanity in all facets of Governance in the State.

The Governor said his administration is determined to restore good government in the state.

"More than anything, I remained conscious of the need to strengthen institutions through upholding the creed of Fairness, Equity, Precedence and Justice in all dealings with all Arms of Government as a general principle of Good Governance" Governor Fintiri said.

"Today, no institution requires the deployment of these principles as much as the Judiciary Arm of Government. This is premised on my avowed vision and commitment to make the tenets of Democracy i.e. the Rule of Law, the bedrock of Justice and Equity so that the common man can have a genuine hope of better things to come".

Governor Fintiri charged the new judges to work tirelessly to see that the courtrooms become Temples of Justice not that of despair, hopelessness and helplessness, while expressing confident that with their long sojourn on the lower Bench or in the Bar, they have what it takes to drive a new phase in the state Judiciary.

Governor Fintiri enjoined the Judges to discharge their duties accordingly.
"Indeed the cumulative effect of the oath you have just subscribed to precludes partiality or favoritism and professes neutrally in striking a balance on the scale of Justice.

"Thus, having accepted this call of duty, it is expected that transparency, discipline, efficiency should be the watchwords.
"I must take time to give this counsel as a reminder of the weight of the oath your Lordships have collectively subscribed to.

"Together as legal luminaries, you carry a heavier burden of saving our Judiciary, building a greater confidence in the judicial system by exhibiting decorum in your daily conduct and carriage" Governor Fintiri stressed.

"As your Government, we are committed to these ideals. Therefore we will not tamper with the sanctity of any Arm. This is which is why we have granted unfettered Autonomy to the Judiciary and the Legislature.

"We are conscious of the fact that good governance cannot be attained without allowing all the Organs of Government to function independently.
"I see myself not as your Governor or Chief Executive but as a partner in the pursuit of the common good for our people. Together, we can deliver this State from the stranglehold of criminals, bring about Law and Order, Entrench peace, stability, prosperity and equal opportunity for all" Governor Fintiri emphasize.

Speaking on behalf of the sworn in Judges, Justice Ishaku Yakubu thanked Governor Ahmadu Umaru Fintiri for upgrading the judiciary and pleadged their loyalty to his government while assuring not to fail the judiciary by delivering their duties accordingly.
Justice Yakubu assured the Judges will delivere judgement to all according to the law.

The Judiciary oath of office and secrecy was administered on the sworn in Judges by the Adamawa State Chief Judge, Justice Nathan Musa at the Banquet Hall, Government House, Yola.