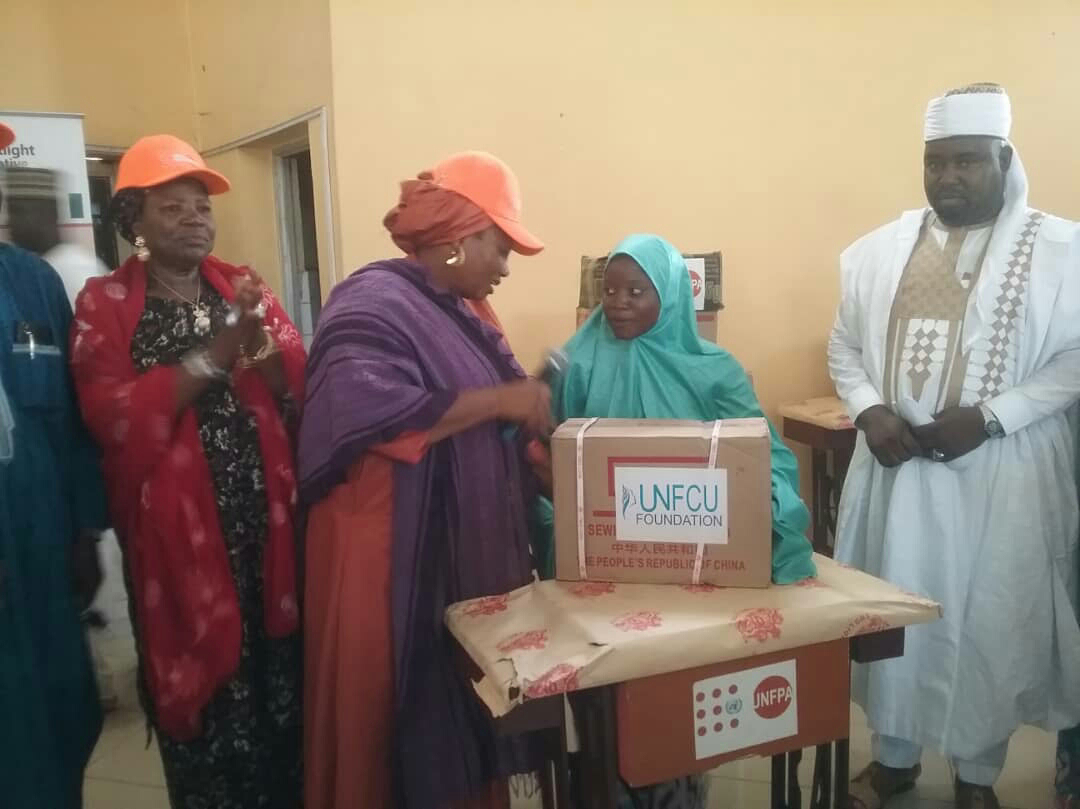 The survivors of Fistula  in Adamawa  State have been rehabilitated and empowered by the FISTULA FOUNDATION in collaboration  with the State Ministry of Women Affairs and Social Development   supported by United Nations Population Fund UNFPA. The  programme   took place at Women Development Centre, Yola.
The aforementioned organisations have trained  and graduated fifty (50) survivors of fistula  across the State,  acquired  skills of their choices  and equipped them with tailoring machines, grinding machines, wrappers and a take off grant to venture into businesses for self reliance.
In a remarks by the Governor's wife, Hajiya Lami Ahmadu Umaru Fintiri, represented by the Hon. Commissioner, State Ministry of Women Affairs and Social Development, Mrs. Lami Ahmed Ga’anda, commended FISTULA FOUNDATION for empowering the beneficiaries . She further lauded the efforts of United  Nations Population Fund  for  supporting the programme. Lami, called on the beneficiaries to utilise the items given to them.
Consequently, in a speech presented by the UNFPA Programme Officer, Dr. Danladi Idrissa, lauded Adamawa State Government and the State Ministry of  Women Affairs for identifying with fistula survivors. He said ‘the survivors are traumatised because of the condition of their health, they are being stigmatised  and sometimes rejected by their Husbands, but, through rehabilitation and empowerment, it gives a survivor a sense of belonging to continue with their normal life. Dr. Danladi, further  explained some causes of fistula to include; prolong labour, not attending ante-natal clinic, early marriages amongst others. He added  that, Adamawa State has recorded 265  cases  of fistula between 2015 to date.
Also, in a  remarks by the representative of  District Head of Jimeta, Mai jimillan Damilu, Malam, Ismaila Muhammad, he thanked  the Adamawa State Government for giving non governmental organisations the opportunity to touch the lives of people.
Additionally, the Director, FISTULA FOUNDATION, Malam. Musa Isa, called  on the State Ministry of Women Affairs and Social Development to provide shelter for fistula survivors so as to be rehabilitated and empowered. He warned  beneficiaries to utilise items given to them judiciously.
Responding on behalf of the beneficiaries, Mrs. Nancy A Chama, expressed  her profound gratitude for the gesture. She added that, before government's intervention, she  was charged with the sum of   # 150,000  in a private Hospital for fistula treatment which she could'nt afford. Fortunately, she is given free treatment.
Climax of the ceremony was presentation of items to the beneficiaries.
03:05
Adamawa Daily Reports
News
Email ThisBlogThis!Share to TwitterShare to Facebook